This past April marked 108 years since the RMS Titanic collided with an iceberg on its maiden voyage from Southhampton to New York City.   By the time the SS Carpathia had arrived to rescue passengers, the Titanic had sank and more than 1,500 passengers lost their lives. It is still one of the deadliest maritime disasters in history.  Survivors of the Titanic have given interviews and written their memoirs. Among them was Colonel Archibald Gracie IV (1858-1912).  On the night of April 14, 1912, Gracie was relaxing in his cabin when shortly before midnight, he was jarred awake and soon realized that the ship’s engines had stopped.  Unaware that the ship had suffered a fatal blow, considerable time passes before the shocking reality begins to settle in.  But when it did, Gracie went into action and this is his account of what he saw that night and what he did as the RMS Titanic met its doomed fate.

This book was published in 1913 but Gracie never saw the reception it received. He died on December 4, 1912 due to the injuries he suffered on the night of the collision, making him one of the earliest Titanic survivors to died in the wake of the tragedy.  As the story begins, Gracie recalls what he was doing in the days before April 14.  What he discloses gives no indications that anything was amiss with the ship.  Passengers are passing the time with a number of activities.  But on the night of April 14, all of that changed.  Upon impact, Gracie relatees that:

“My stateroom was an outside one on Deck C on the starboard quarter, somewhat abaft amidships. It was No. C, 51. I was enjoying a good night’s rest when I was aroused by a sudden shock and noise forward on the starboard side, which I at once concluded was caused by a collision, with some other ship perhaps.”

It was a collision indeed, but one that none of the passengers could have ever imagined.  Soon it became clear to passengers that the Titanic was in trouble and as the ship began to take on water, urgency creeped in. But even in the face of death, the majority of passengers remained relatively calm.  However, ominous signs were soon upon them and forty-five minutes later, Captain Edward J. Smith (1850-1912) gave the order to lower the life boats.  Gracie provides a keen observation about the distress signals launched by the Titanic’s crew:

“I was on the Boat Deck when I saw and heard the first rocket, and then successive ones sent up at intervals thereafter. These were followed by the Morse red and blue lights, which were signalled near by us on the deck where we were; but we looked in vain for any response. These signals of distress indicated to every one of us that the ship’s fate was sealed, and that she might sink before the lifeboats could be lowered.”

Soon the loading of passengers into the lifeboats was underway and Gracie provides insight as to how the process took place and his own efforts in assisting Second Officer Charles Lightoller (1874-1952).  Gracie did not initially get into a boat himself but insted remained on the ship where he also makes acquaintenance with victim James Clinch Smith. His description of the ship’s final moments made the hair stand up on my neck. And it was nothing short of miraculous that Gracie eventually ended up in a lifeboat himself.  And it was not until he was board the Carpathia that he realized the full extent of his injuries and his ordeal.

As a first-hand witness, Gracie found himself in a position to debunk rumors about the night’s events, in particular whether an explosion took place, if the the ship broke in tow and whether some officers shot themselves.  Conspiracy theories may not believe what he has to say but as far as a I know, Gracie’s account stands as credible to this day.  And there is no doubt that he was a passenger and a survivor.  However, there is more to the book than just his memories and clarifying rumors.  What follows in the second half of the book is a solid discussion of the events that took place on other lifeboats taht were dispatched by the White Star Line’s crew.  Also included are statements provided by survivors to eithe the British of American inquiries and in appearances such as that of Lightoller, testimony is sampled from both.  It is an interesting read and provides insight into what the survivors were contending with as they drifted in the middle of the Atlantic Ocean with no rescue ship in sight.

Gracie is adamant in his belief that the crew of the White Star performed admirably that night.  He expresses praise for Officer Lightoller and others who rose to the challenge that night. However, he does have an interesting observation about Edward J. Smith and also provides a statement by retired Rear Admiral Alfred Thayer Mahan (1840-1914) that was submitted to the Evening Post in which the retired Navy officer shares his views on J. Bruce Ismay (1862-1937. Readers may recall that Ismay was Managing Director of the White Star Line at the time of the disaster and that he survived the disaster after getting into the last lifeboat that left the ship.  Mahan minces no words about his feelings on Ismay’s actions that night but ultimately, it is up to the reader whether Ismay deserves the criticism leveled against him.

The book is quite short but still a fascinating yet tragic read.  The most haunting moments are undoubtedly the Titanic’s final moments as passengers still aboard the ship realized the pending doom before them.  All hope for them was lost and those who managed to find a lifeboat could only watch in disbelief and horror and what was occurring before their eyes. It is a memory that none of them would ever forget. Their memories which have been recorded for history are reminders of one of the darkest nights in maritime history.  Gracie’s story here has stood the test of time as a key addition to the wealth of material regarding the RMS Titanic. 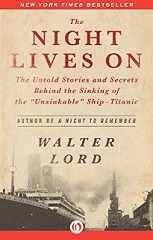 The sinking of the RMS Titanic remains the deadliest maritime incident in history with over 1,500 casualties on the night of April 15, 1912, as the vessel embarked on its maiden voyage from Southampton, England to New York City.  Today, more than 100 years after the disaster, many questions about that night continue to linger with the answers to those questions lost to time and the remaining survivors of the wreck are now deceased. The never ending questions that remain are how and why did the tragedy occur?  Researchers and investigative panels have attempted to answer this question and while we know a great deal of critical information regarding the tragedy, there are still many beliefs held as to how the tragedy  unfolded. Some of the theories go as far to suggest that is was actually the Titanic’s sister ship The Olympic which actually sank at the bottom on the sea. Conspiracy theories, misinformation and unfounded claims have caused confusion and masked the truth regarding the events of the night of April 15, 1912.

Walter Lord revisits that cold April night in the middle of the Atlantic to  relive the events as they unfolded in an attempt to form a complete picture of what transpired and how.  Drawing on the testimony taken of the remaining crew members following the tragedy,  passenger accounts and documents, the image we see from Lord’s research is one in which many individuals were complicit and that the sinking was a disaster in the making even before the ship left Southampton for its maiden voyage.  He also puts to rest several ridiculous stories that were told after the sinking without any factual basis, persisting for several decades and serving only to add more confusion to an already horrific account.  Stories such as a passenger dressing in woman’s clothing and shootings aboard the ship became staples of tales told of the ship’s last moments.

J. Bruce Ismay, chairman and managing director of the White Star Line, the company that owned both the Olympic and Titanic, never recovered following the disaster and was savaged by the media for having left the ship and the company’s failure to protect the lives of its passengers.  But as we see as we make our way through this exceptional account of the night, a series of events outside of Ismay’s control, unfolded and in the process doomed the ship almost from the start.  Staffed with a well-trained crew and in close proximity to other ships that night, mainly the The RMS Carpathia and the SS Californian, the Titanic’s voyage should have been a relatively smooth and safe passage.  But as we now know, fate took over that night resulting in unspeakable horror that continues to stir discussion and spark controversy to this day.

The sinking of the Titanic, for all of its tragic aspects, did serve as a lesson for vessel safety for future generations.  White Star Line merged with Cunard in 1934 and is now owned by the Carnival corporation.  The Titanic remains on the floor of the ocean, its final resting place from which it will never be lifted.  On May 31, 2009, Millvina Dean, the last survivor of the disaster, died at her home in Southampton, England.  And in 2014, The Indegraph Times uploaded a documentary to YouTube narrated by Peter Willis that presents the event in a completely different light suggesting that the tragedy was a  carefully staged deception by the vessel’s owners that went horribly wrong.   Everyone that was on the vessel is now deceased and are unable to give any further testimony about the events of that night.  Many questions will probably remain unanswered for an eternity.  But from the investigations that took place, the documentation that has survived and books such as this excellent investigative report by Lord, we do have an almost complete picture of what really happened that night separating fact from fiction in the story of the great and tragic RMS Titanic.