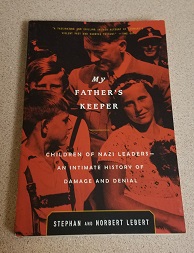 May 1, 1945- The Allied forces are nearly at the entrance of Hitler’s underground bunker in Berlin.  Hitler and Eva Braun have been dead since the day before.  Others have fled Berlin in fear of their lives. The remaining members are forced with choosing between capture by the Allies or death.  Third Reich propaganda minster Joseph Goebbels and his wife Magda both commit suicide after having their six children poisoned.  Their children escape the fate of falling into Allied hands and do not witness the final collapse of the Third Reich and the division of post-war Berlin.  The fear of retribution by the Red Army and the revelations of the atrocities committed against Europe’s Jewish population have caused many Germans to prefer death rather than face justice at the hands of an Allied soldiers.  Goebbels’ children although deprived of their lives, escaped a fate that would effect the children of other Nazi party officials.  They would be faced to confront the truth of their parents’ actions during the rise of the N.S.D.A.P. and Hitler’s assumption of power in Germany.  This book contains the stories of some of those children.

Hitler never had any children of his own stating clearly that he had too much responsibility towards the people of Germany to think about his own family line.  Perhaps it is one of the saving graces of the war for I shudder to think about the amount of cruelty a child of Hitler would have faced had they survived the war.  The belief of the “master race” resulted in German men and women being encouraged to have as many children as possible. And in fact, many of the top members of Hitler’s cabinet were fathers.  Their children did survive the war and are still alive today . Stephen Lebert resumed the work of his father Norman in exploring the effects of the revelations upon the lives of the Nazi descendants.  And what father and son have found is remarkable and also tragic. They conducted interviews with the children of Martin Bormann, Hans Frank, Rudolf Hess, Herman Goering and Heinrich Himmler.  The interviews are revealing and the damage inflicted upon them is evident in many way.  Denial is a common theme in the interviews  and some of them refuse to believe what has been proven to be correct. The others have accepted it and have lived shattered lives unable to come to terms with what their father had done.   And incredibly, one in particular remains committed to her father’s standing as a Nazi and truly believes him to be innocent.

The most interesting part of the book is that there is no way to know beforehand which way the subject will go.  Their responses, thoughts and feelings vary highlighting the haphazard effect the war had upon them.  I had often wondered what happened to the children of the Reich. This book answers that question and more.  A truly tragic reality is that they were not allowed to have a normal childhood by any means.  The tyrannical rule of Adolf Hitler and the Reich’s illogical policies plunged Germany into a war and allowed its members to live out their own sadistic ideals as they pillaged, raped and murdered innocent people.  And the true irony is that these very same people who sent the children of Jews to their deaths, had families of their own. But I do not believe they ever thought of their children for if they did, they would have never placed them in such a position.

Today they continue to live their lives but the memories of the war and their parents are still fresh in their minds.  To their very last day, they will scary the mental and emotional scars inflicted upon them by the fallout from the second world war.  And as they think back on the family life they lost, they will have to ask the question if they are truly their fathers’ keepers.