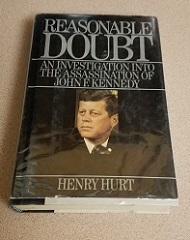 The assassination of President John F. Kennedy remains the biggest unsolved murder in American history.   The murders of the President, Lee Harvey Oswald and Dallas Police Officer J.D. Tippitt, have fascinated the American public for over 50 years.  Hundreds of books have been published, each one analyzing the case from a different angle.  Henry Hurt presents to us, his investigation into the murder and why there’s reasonable doubt about what we’ve been told to believe all of these years.  The book was published in 1985 and since then, other books have appeared, most notably Joseph McBride’s ‘Into The Nightmare’.  There is far more information is available today than when Hurt wrote this book due to the release of thousands of pages of documents relating to the investigation.  But any researcher into the assassination will be well served by reading Hurt’s interesting investigative report.   From the start, he explains that he wanted to believe that the Warren Commission report was the final say on those tragic events in Dallas on that day.  But as he continued to dig deeper into the investigation, more questions arose than answers, casting severe doubt on the Commission’s report and giving him reasonable doubt as to the guilt of Lee Harvey Oswald.

The most perplexing aspect of the entire crime is that as one uncovers more information of the sinister deeds that day, the more mysterious and puzzling it becomes.  There are never-ending leads and hundreds of suspicious characters, but concrete links to major figures continue to elude even the most experienced of researchers.  Hurt’s research into the lives of Oswald and Tippit was exhaustively completely and  he concludes, both men are still a mystery.  And while the question as to whether Ruby, Oswald and Tippitt knew each other remains,  there’s circumstantial evidence that there did indeed exist, some sort of relationship between the three.   Hurt also revealed the names of several individuals who I previously had been unaware of and their possible relationship to the events in Dealey plaza.   I should point out that those who are familiar with the assassination and have previously read other books will fill in some of the gaps in the book regarding information unknown to the author at the time.  This book is rarely mentioned in conversations about the assassination and is sometimes overshadowed by Jim Marrs’ classic, ‘Crossfire’.  But I think it is recommended reading for anyone interested in the assassination of John F. Kennedy.