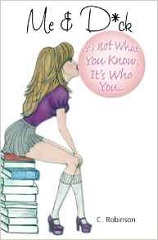 There are certain elements of life  that remain constant, never-ceasing to captivate, intimidate and stir controversy.  An accepted part of life, sex is one of many things that always sells no matter how taboo it may be in some cultures.  For some, it’s a very private subject that shouldn’t be discussed in conversation outside of the home and for others, it’s a topic which should be freely discussed.   No matter which side you find yourself on,  we can all agree that sex always remains fascinating and its explicitness is part of its aura.

In this intriguing fictional tale,  author C. Robinson brings to us Sunshyne Mercy, teacher by day and escort by night. Existing in two different worlds, Sunshyne exemplifies the human ability to live a life full of contradiction but at the same time, maintaining integrity and hope in world that can be full of treachery, tragedy and disparity.  Jung explained it the best in his analysis of the duality of man.

The book contains an entire cast of characters and I believe that if Oscar Wilde were alive today, this would be by far one of his favorite books.   While the book is about sex in most parts, it’s also about human emotions, psychology and self-reflection.  No one in the book is beyond reproach and through these characters we see the internal struggle for self-acceptance that plagues so many of us.   Sunshyne is an escort, but she’s not the ordinary one and her escapades and thoughts pull the reader in one page at a time.  And through her eyes, we see that we all have secrets, some are just darker than others.  This is the first part of a continuing project and the second part should be just as good as the first if not better.