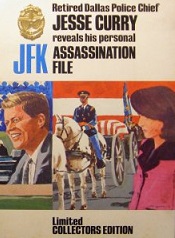 Chief Curry had been in the lead car of the motorcade making him a crucial eye-witness to the events in Dealey Plaza.  He gave his testimony before the Warren Commission on April 15, 1964.   This limited collector’s edition of Curry’s book reveals the beliefs of the former chief and sheds slight on several interesting parts of the crime that have never been fully explained. Curry is frank and to the point making it clear that the book is not intended to support the Warren Commission’s conclusions or any other conclusions that have been made about the crime.  He further states that it is up to each person to make up their mind on what they think really happened on that day.   Provided in the book are miscellaneous pieces of evidence such as documentation taken off of Oswald, homicide reports and statements of officers of the force regarding the custody of Oswald and the alleged relationship between Jack Ruby and the Dallas Police.

In the years that have passed since the release of Curry’s book, a staggering amount of information has come to light regarding the events of that day.   And what we know now conflicts with some of the statements in Curry’s book.  But whether Curry was unaware of these facts or misstated certain facts is knowledge he took with him to the grave.  In fairness, the book was never intended to be a smoking gun about the crime but rather the recollections of the top office in the Dallas Police at the time.  With that being said, I think it’s a good read and unquestionably relevant to the growing amount of literature regarding the assassination of President John F. Kennedy.