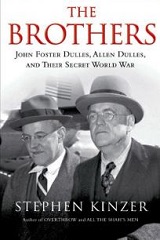 On July 26, 1947, President Harry S. Truman signs the National Security Act, establish a new intelligence agency to gather information deemed critical to the protection of the United States from foreign threats.  The new agency is known as the Central Intelligence Agency and its initial members are former members of the Office of Strategic Services which had been discontinued following the allied Victory in World War II.   As the Cold War heated up with the Soviet Union and new leaders came to light in several continents, the members of the new agency felt a surging sense to act preemptively to what was perceived to be direct threats to the safety and stability of the western hemisphere.  Among the large number of those afraid of Communist infiltration and the end of U.S. business interest were two brothers who controlled an overwhelming majority of power over U.S. foreign policy whose names today are largely unknown to the younger generation.  John Foster and Allen Welsh Dulles, the former Secretary of State and Director of the C.I.A., remain controversial and pivotal figures in 20th century American history.  In this expose about their time in high posts within the U.S. government, author Stephen Kinzer reveals the dark side of the U.S. government as two brothers used the White House, military and Central Intelligence Agency to advance their financial agenda across several continents resulting in the overthrow of governments, assassination of foreign leaders and financial exploitation of smaller nations caught in the grip of U.S. occupation.

Many years have passed since the Dulles brothers controlled the foreign policy of the U.S. government but the effects of their policies were felt and are being felt even today.   Following World War II, many nations began to seek a different course after witnessing and in other cases, learning of the atrocities in Nazi controlled Germany and in parts of China occupied by the Japanese Army.   The Soviet Union, seeking to expand its influence and domain, began to offer to support smaller nations looking to break the shackles of colonialism and implement an independent government. This new form of free thought combined with the looming threat to business interest and monetary gains would result in some of the darkest moments in the history of U.S. foreign policy.  Some of these actions would forever tarnish the reputation of the C.I.A. and even today in 2016, more information once classified is coming to light revealing the true nature of business of the once mysterious agency.

One month after the assassination of John. F. Kennedy, former president Harry S. Truman penned an article including a strong advisory that the nation needed to watch the actions of the C.I.A.  Since its inception, the agency had grown to become a government in itself and as Stephen Kinzer shows, the collaboration between two brothers in positions of power, had deadly implication for those determined to be enemies of the United States. Patrice Lumumba, Mohammed Mossadegh,  Jacobo Arbenz and Fidel Castro are only a few of the many figures that became targets of the Dulles’ vengeance.   Kinzer’s research brings the past alive and takes us right into the lion’s den to bear witness to the process in which the plots unfolded and the course of history was change.  And similarly as author David Talbot also points out in ‘The Devil’s Chessboard‘, the agency at its height, was unstoppable committing illegal and treasonous acts.  The programs known as Operation Paperclip, Operation Sunrise, MK Ultra and ZR/Rifle have opened the public’s eyes to the deadly and mind-boggling programs initiated by the agency in under the tutelage of Allen Dulles himself as both an operative of the C.I.A. and as its director.  And many of these actions came with the blessing and encouragement from Foster as Secretary of State to President Eisenhower.

Today, the Dulles’ brothers are nothing more than relics of history to most. Foster died on May 24, 1959 and Allen on January 29, 1969.  And aside from Washington Dulles International Airport,  their names have been forgotten by most.  But as Stephen Kinzer reminds us in this excellent inside look into their lives and actions, there was a time in United States history when the two of them controlled U.S. foreign policy and waged their own secret world war.

“Victory has a hundred fathers and defeat is an orphan” President John F. Kennedy, April, 1961