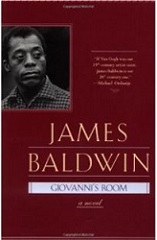 The late James Baldwin (1924-1987), remains one of America’s most gifted authors.  He is also remembered as an icon of the civil rights movement who was fiercely outspoken against the injustices committed against African-Americans.  Similar to Bayard Rustin,  his homosexuality resulted in a life long inner turmoil in a quest to find true love and happiness.  When he died in France in December, 1987, he left this world as a bachelor and without children.  It could be argued that his children are the writings he left behind that examined society, human nature and emotions. One of these stories is Giovanni’s Room, Baldwin’s masterpiece about the complexities of the human heart and the burden of living with repressed sexuality.

The story begins with David, an American citizen living in France.  In America remain his father who is a widower.  He is a native of San Francisco but has made Paris his new home. His girlfriend Hella, is away on vacation in Spain to reevaluate her feelings toward him and contemplate their future together.  David is free to spend his nights on the streets of Paris and often is accompanied by his closest friend Jacques.  They frequent a local bar owned by a character named Guillaume.  It is on one of their visits to the bar that David meets the young man who becomes the focal point of the story, Giovanni, a recent immigrant from Italy who is now employed as a bartender. A brief conversation between the two blossoms and before long the dynamics of their relationship change revealing the alternative lifestyle of all of the male characters at the bar. But what transpires between David, Giovanni and Hella, highlights the dangerous and infinitely complex nature of love.

Baldwin confronts the concept of sexuality examining it under a microscope which forces the reader to look in the mirror as we see the lives of David and Giovanni change profoundly throughout the novel.  And Giovanni’s fate at the end of the novel shows the ability of love, hate and rage to possess a person equally at the same time. David’s predicament will seem incredulous to some and his actions deplorable. But as Hella and Giovanni both wonder about him, does he truly love anyone or even himself? And even as the book closes, we still don’t know for sure. But what we do know is that love has the ability to create lives, sustain them and ultimately tear them apart. It has often been said that it is better to have loved than to have never loved at all. Would Giovanni or Hella agree?   Or would they say a life without love is more satisfactory?  Baldwin leaves it up to the reader to debate.

The novel is set in 1956, a time in which homosexual relationships were not only highly taboo and also criminal in many countries.  David struggles with himself and his role in the lives of Hella and Giovanni and his battle within is one that is waged by men and women throughout the world unsure of their own sexuality.   His actions and the effects of his omissions upon those closest to him, bring the issue  of truth to the surface.  The truth often hurts regardless of how it is told. For David, Giovanni and Hella, it is beyond sobering.   And as a result of the truth, none of their lives are ever the same again.  And herein lies one of the most powerful effects of the feeling of true love.

The book is short, roughly around 168 pages, but contained within it, is a fascinating story revolving around everyday struggles of people from all walks of life.  And the novel shows the seemingly never ending ingenious of Baldwin as a writer.  And although the story is set in France (Baldwin’s favorite European destination), it could have easily taken place in other major cities across the world.  The characters could be of any ethnicity but the feelings on display by the characters in the book are exemplified in all cultures.  And once you have finished the book, you will see the importance of Giovanni’s room.