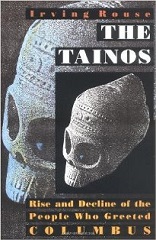 The reputation of Christopher Columbus and his actions continue to be re-examined as more cities throughout the United States pay homage to the nation’s Native American population.  His arrival in the Caribbean in 1492 set off a chain of events critical to development of the area as we know it today.   It is common knowledge that many atrocities were committed during Columbus’ voyages to what was called the New World.  As the Spanish colonized the Caribbean, the native Indian population began to decline and was nearly non-existent by 1524.  We know them by the name Taino but their history and significance is still widely understated.  But just who were the Tainos and how did they come to inhabit what is today the Spanish, British, Dutch and French West-Indies?

Irving Rouse was an archaeologist on the faculty of Yale University and conducted extensive work on the history of the Taino population.  In this phenomenal account of the history of the Taino Indians, he meticulously reconstructs the history of the region and explains the long and intricate evolution of the mysterious natives.  Tragically, their language was never officially recorded and scare parts of it remain today.  No written records are in existence regarding their daily lives to give researchers insight into their culture. As a result they are forced to rely on artifacts found during excavations.  But incredibly,  we are able to trace their origins back to 4000 b.c.. Rouse thoroughly explains the paths taken by the original inhabitants of South America and their journeys north towards the Caribbean. The histories of the Casimiroid, Ortoirnod , Saladoid and Ostionoid people come to life through Rouse’s analysis and the ethnic groups of the Guanahatabey, Taino, Igneri and Island-Carib are further analyzed during the period between 1492, the arrival of Columbus and 1524, the last official year for their existence.

Today, Christianity is the dominant religion in the Caribbean.  The acquisition of territory by Spanish invaders resulted not only in occupation of native land but the forced conversion of the natives to a new faith. Rouse takes great strides to show us that the Tainos had their own religion and gods which they believed served many purposes in life.   Similar to the Greeks and Romans, the Gods and Goddesses were integral to Taino society, influence everything from childbirth to inclement weather. Their significance is explained giving the reader greater insight as to how Taino society operated during their time.  Without written records, the religions artifacts are critical to understanding the beliefs held during archaic times.

The legacy  of Christopher Columbus continues to be debated hundreds of years following his death.  The now prevailing view is that he was a genocidal maniac whose sole purpose was to exterminate the native Indians.  But as Rouse shows us,  the commonly held view of Columbus suffers from many faults and he was not quite what he is made out to be.  His four voyages to the Caribbean had a range of effects but the reality is that the majority of horrific acts of violence that transpired, did so at the times when he was absent from the region, having returned to Spain to assess the progress of the Spanish expeditions.  A gifted navigator and explorer, his lack of management and planning served as a catalysts for the unspeakable acts of horror that were committed by those under his command left in charge to enforce the will of the Spanish government. Columbus died only 12 years following his first visit to the Caribbean and two years following his fourth voyage, so he did not live to see the extermination of the Taino people.   And while he did not “discover” America, his voyages did develop a new connection between Europe and the Americas.  He was not the first to make the trip to North America, coming in second to the Viking explorers, but he did provide a highly critical link between two continents.  And although he was searching for a new passage to Asia, fate took him to the Caribbean, the place where he and his brothers Diego and Bartolome would make their names known.  But for all of his successes, his biggest failure was his inability to protect the native Taino population resulting in their gradual decline and complete extermination by violence, marriage and even disease.

As of late, there has been a resurgence of Taino heritage and pride and thousands of Spanish-speaking inhabitants of the Caribbean proudly exclaim their Taino routes.  The story of the mysterious race of people who dominated the Caribbean is being retold in its entirety but there is much that still needs to be said.  And each October as we look back on the life of Columbus,  we should also look back on the people that he encountered and their tragic history.