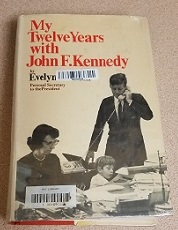 November 22, 1963 remains a day seared into the minds of millions of people around the world.  Known informally in the United States as the day Kennedy died, each year it reminds of the tragic events of that day in Dallas, Texas.  The spirit of John F. Kennedy has remained with America and today, decades after his death, his legacy continues to gain in strength.  The debate regarding his accomplishments while in office has raged continuously.  But what cannot be denied is his impact of the conscience of the United States and his status as a symbol of hope for an entire generation.  When he died, he left behind not only a widow and two children, but millions of fans, friends and his personal secretary of twelve years, Evelyn Lincoln.

Kennedy’s administration, named “Camelot” by the press, has been the source of inquisitive researchers and those enamored with his charm and intellectually sharp personality.  In this book, Lincoln has recorded her memories of what it was like for the mythical and tragic young president.   Some readers may be familiar with her other book Kennedy and Johnson, her memoir regarding the relationship between Kennedy and Vice President Lyndon Johnson.  In comparison, Johnson is not seen frequently in this book. In fact, he is hardly mentioned but only a handful of times.  This book is strictly about the relationship between Kennedy and his secretary who devoted twelve long years of her life in service to him.

The book begins as she reflects on the aftermath of the trip to Dallas.  But it should be noted that this book is not about his murder and there is no smoking gun in the book. Researchers and assassination buffs will not find anything of value in here.   Where the book does shine however, is showing Kennedy’s personal side.  In stark contrast to the clean-cut and smooth image presented in public, behind the scenes, the senator and later president is revealed to be as forgetful as the next person,  unorganized as most businessmen and as kind as some of the greatest people I have ever met in life.  Lincoln’s book does an excellent job of showing how and why so many people were inspired to work with and for him.  Furthermore, it adds to his prestige as one of the most different individuals to ever occupy the oval office.

I am sure that some readers will find it interesting that she makes no mention of any of Kennedy’s major shortcomings, particularly his extramarital affairs.   For some it will be hard to accept that his secretary who surely would have been privy to such knowledge makes no mention of it at all.   I firmly believe it was not needed and was not the point of her book.  Similar to Arthur Schlesinger, she makes note of her working relationship with Kennedy which was the goal of the book.   And on this level, she succeeds without question.   The book was published in 1965, roughly two years after his murder.  I can only imagine the amount of grief she endured at the time and the challenge she faced in writing this memoir.  Its publication and existence are a testament to her will and are a fitting tribute to the slain leader.

Anyone who has ever worked as a secretary will appreciate this book.  I personally have worked as a secretarial assistant and found myself nodding my head at times during the book when she relates one of Kennedy’s quirks.  All bosses have them and in all different forms. But their quirks are also what helps to make the unique and unforgettable. Kennedy and Lincoln are both deceased but they shared a time together that stands out in American history both for great reasons and unfortunately for tragic reasons.   Her tribute to her former boss is heartfelt and will be warmly received in any library about the life and political career of John Fitzgerald Kennedy.