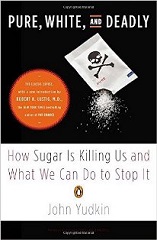 In the United States, heart disease and cancer are the leading killers of Americans each.  As of 2017, heart disease was attributed to 614,348 deaths and cancer, an almost equally staggering 591,699. Diabetes and other metabolic ailments plague millions of others each year.  Doctors have made great strides in learning the root causes of these diseases and appropriate methods of treatment.  Diet is always a factor in any treatment plan and for many cultures, it can also be a main factor in the development of the condition.  Most of us can fondly remember our parents and relatives warning us about the intake of excess salt and sugar to avoid high blood pressure and a trip to the dentist.  While it was known by many not to eat too much sugar, exactly why has always remained elusive to most.  Dr. John Yudkin (1910-1995) was a British physiologist and nutritionist associated with the Queen Elizabeth College in London and an early voice warning humanity about the dangers of sugar consumption. This book which he aptly titled Pure, White and Deadly, investigates the overwhelming inclusion of sugar in the average diet and how our consumption can lead us to early graves.  The book was written in 1972, decades before the explosion of diabetes across the globe. But what is contained in the pages of this book is still relevant today for those who choose to listen.

As health crisis continue to grow, Yudkin is vindicated repeatedly as more diseases and other health issues are linked the consumption of sugar.   As a physiologist and nutritionist, Yudkin was at an advantage over most of us; he was able to study the effects of sugar as part of his work giving him an inside look into one of the most dangerous substances ever created.  What I found to be very admirable about Yudkin is that he does lecture the reader. He does however, relay the results of his findings and leaves it up to the reader to make a personal decision.  And in a moment of admission, he even discloses that he overcame his own sugar addiction.  The author also confesses to overcoming a sugar addiction many years ago and can relate to everything written in this book.  We have the freedom to indulge in any food that we like but we will do ourselves a favor to take a closer look at what we eat, why and how it affects us.  Sugar has quickly become the most widely consumed product and can be found in nearly every food that can be bought in a store of supermarket. Manufacturers have long realized the potential of sugar to affect sales and solidify a large consumer base.  Yudkin explores this side of the matter in addition to the scientific data. And what we see is a behemoth industry that shows no signs of slowing down.  The question remains however, at what cost?

To say that Yudkin had amazing foresight would be an understatement. As I read articles and watch those around me suffer from highly preventable diseases I often find myself repeatedly examining their eating habits to see if their diet is playing a part in the quality of life.  And sadly, more often than not, sugar is a main culprit.   Yudkin is vindicated many times over and his legacy is continued through the work of Dr. Robert Lustig, who actively encourages the elimination of sugar from the diet.  If Yudkin were alive today, he would probably shake his head in disgust and seethe at the amount of sugar that is consumed today.   Undoubtedly, he would be considered an enemy of the state by the sugar industry and blackballed in without question. But the reality is that even in 1972, he was keenly aware of the dangers of sugar consumption and left us this classic that takes a look at the modern creation of sucrose and other forms of sugar.  If you have concerns about sugar and how it affects your health, this is a good place to start in the struggle that may ultimately save and extend your life.