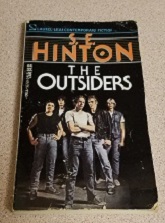 This past weekend I had the fortune of becoming re-acquainted with two of my teachers from the eighth grade.  One of them has now turned eighty and looks as sharp as she did when I was a thirteen year-old kid.  During the conversation, I mentioned that I still had my copy of The Outsiders, the book we read as a class that has remained with me to this day and occupies a space on my bookshelf.  I find it incredible that after nearly twenty-five years, I still love the book and remember passages from the book in their entirety. It is a classic story given to us as a gift that keeps on giving by famed author S.E. Hinton (1948-).  The book is popular among many of my peers and my former teacher has recently given a copy to her grandsons so that they may find joy in the book.  I had the pleasure to meet both of them and believe that they will turn out to be fine young men.  Many years from now, they took will look back on The Outsiders as one of the greatest books they have ever read.

But what is it about this book that makes it so special?  Besides having been read by millions of students across the United States, Francis Ford Coppola turned the book into a feature film with an all-star cast of actors who all went on to have further success in Hollywood.  The story itself seems simple enough on the outside but in reality, there are numerous messages in the book for the reader to adapt in their own life.  The story centers around Ponyboy, the youngest of the Curtis brothers.   He lives with his older brothers Sodapop who works at a local gas station and Darrell (“Darry”) who has become their guardian and protector after their parents perished in a violent car accident.   Ponyboy is a high school student and this story is the focus of an essay he is writing as the book opens.  Continuing along, we are slowly introduced to the rest of the supporting characters. Ponyboy’s closest friend is Johnny Cade who comes from a broken home and spends most of his time with Ponyboy.   Johnny appears as one of the weaker characters in the film and his protector comes in the form of Dallas Winston who takes on the role of his older brother.  The comedian of the group is Two-Bit Matthews, who loves Mickey Mouse but is also a fearless brawler.  Sodapop’s best friend is Steve Randle, who works with him at the gas station.  Steve is a little on the wild side but fiercely loyal to all of his friends. Darry does not have any close friends in the book and primarily spends his time at work to pay the bills at the house.  Nonetheless his character plays an important role in the story.  This young group of men are part of the crowd referred to as “the greasers”.    They are the unlucky ones that society looks down on.  The fight, swear, smoke and live as they please without supervision.  To society, they are everything you do not want your child to be.  Their rivals are “The Socs”  who also embody the role of the antagonists and the upper class members of society that wear khakis and drive Mustangs.

Life for both parties is fairly routine until Ponyboy and Johnny have a deadly encounter with the Socs following an earlier incident at the drive-in movies.   Becoming fugitives, Ponyboy and Johnny eventually decide to return home and clear their names. But their plan is not as simple as they think.  Several events take place that change the course of their lives giving the book a new dimension that pulls the reader in even further.  Life and death become central issues in the book and the pride that the greasers have in their existence even as they struggle with their social status. In a cruel way, some of them have accepted their lives and their fates as if the script has been completed.   Their experiences, combined with the joyful and tragic moments in the book, are a commentary on social issues that continue to affect society.  Ponyboy is our captain through this story and through his eyes we see first hand the devastating effects of the lives they are forced to live. The Socs are actually a sub-story but their appearance is the source of the grief and happiness that resides within the greasers.  Cherry Valance proves to be the most dynamic of them all and her friendship with Ponyboy gives the book the edge of romance that a good story typically contains.  And in the end, when we return to him, we come full circle after going on a moving journey.

To say that Hinton’s book is incredible would be an understatement.  Her masterpiece is American history and one of the best stories about the nation’s youth ever composed.   The story is set in the 1960s in the Midwestern part of the country.  The social climate is much different from today but not a too distant past.  The drive-in has mostly faded into obscurity along with the many Dairy Queens and abandoned churches of “Jay Mountain”.   Social media are the method of communications for today’s youth and Starbucks has phased out many of the mainstay coffee shops characteristic of small town USA.  But the story is retold daily as the privileged and underprivileged live their lives at opposite end of the social ladder.  But as we see in the book, there are times where the last shall be first.  They may be considered the lowest class, but by the end of the book I am sure that you too will become fans of the greasers and root for all of them to make it through the story.   Hinton keeps the suspense up throughout the book and we never know what is coming next.  All of the characters are fascinating characters and their entrances and departures from the story are part of what makes it such an enchanting read.

In 1983, Francis Ford Coppola helped adapt the book for the silver-screen.  C Thomas Howell assumed the role of Ponyboy and was joined by Ralph Macchio (Johnny Cade), Matt Dillon (Dallas Winston), Tom Cruise (Steve Randle), Rob Lowe (Sodapop Curtis), Patrick Swayze (Darrell Curtis), Emilio Estevez (Two-Bit Matthews) and Diane Lane (Cherry Valance).  The film is a cult classic and must have for those who have come to love the book.  I still watch it on occasion when I feel the need to revisit Hinton’s classic.  And each time I feel as if it is my first viewing.   Hinton would go on to write other classics such as That Was Then, This Is Now and Rumble Fish, but The Outsiders remains my personal favorite which I will continue to embrace for years to come.