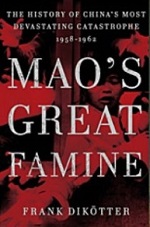 Previously, I reviewed Frank Dikötter’s The Tragedy of Liberation: A History of the Chinese Revolution 1945-1957 and The Cultural Revolution: A People’s History, 1962-1976, investigative accounts into life under the rule of Chairman Mao Zedong (1893-1976).  In the first volume, Tragedy of Liberation, we learned about the transformation of China following the defeat of Chiang Kai-Shek (1887-1975) and his Kuomintang Nationalist party.  In the third volume, The Cultural Revolution, the behind the scenes political battles are put on display revealing the dysfunction that had engulfed Mao’s inner circle.   Here in Mao’s Great Famine,  Dikötter takes us back in time to the Great Leap Forward and its catastrophic failure between the years of 1958 and 1962.   I feel the need to point out that by far, this part of the trilogy was the most difficult to read. As usual, Dikötter’s writing style is to the point and very concise.  The difficult part is the material at hand.   Today we know a fair amount about the Great Leap Forward and how it failed to transform Chinese society.  The famine that ensued is known but what may not be known are the facts about what really happened behind the closed doors of China as a government struggled to move a nation forward as widespread hunger decimated its population.

If you are a reader with a sensitive stomach or easily disturbed, this may not be the book for you.  But if you are a reader that is able to digest material that is emotionally and mentally difficult to accept, then this book will be one that you can add to your reading list.  Some may wonder why a book such as this is needed.  I believe it is important because it reveals to us what many probably did not and do not know.  The details are sometimes gory and all around tragic.  At several points in the book, I wondered to myself how human beings could do the things that they did to each other.  The policy of collectivization and the labor mandated by the government devastated the country in ways from which it is still recovering.  Mao’s grip over China was relentless and his failure to first grasp the severity of the situation and his lack of action to halt the descent is mystifying and infuriating.   And considering what was known to have occurred in counties across the country, I am astounded that he was able to sleep at night with the blood of millions of Chinese on his hands.  Perhaps towards the end of his life and in closed-door meetings, he did voice concern and repulsion about what was transpiring. But if that did happen, those facts have remained secret and are locked away from public view. One day we may find out more of the truth but for now we can only assume.

In between the descriptions of famine and violence,  I did pick up a possibly unintended message in the book; we should all be grateful for the privileges and comforts in life that we have.  I personally have never had the experiences detailed by Dikötter.  And I can only imagine what life for them was like.   Through his work, I now know their stories and can see their pain but I can never say that I know their struggle.  Daily episodes of gratuitous violence, sexual assault, exhaustion, inhumane living conditions and death occurred with no reprieve.  And when people did try to make their voices heard, they were met with severe resistance by cadres unwavering in their adulation to the Chairman.  Lives were ended and others had their career ruined as the Red Guard made its presence felt throughout the country.  Those who did not succumb to violence, often had to deal with extreme hunger, disease and mental degradation.  The number of deaths that occurred is not known for sure but as we see in the book, it is believed that over 40 million Chinese people died during the Great Leap Forward. It is by far the worst case of systemic mass murder the world has ever seen and hopefully never will see again.

Today, Mao’s picture can still be found across China and his tomb in Beijing is open to the public.  But as we come to know more about the Great Leap Forward and the Cultural Revolution, we will be forced to reexamine what we thought we knew about the Chairman and the legacy that lives decades after his death.  This book is a hard look at the Great Leap Forward and all of its infamy.