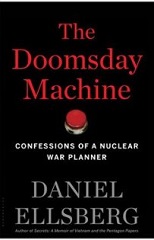 Between August 5 and August 9, 1945, the United States Air Force changed the course of history when the B-29 pilots dropped atomic bombs on the Japanese cities of Hiroshima and Nagasaki.  Today, more than seventy years later, the debate regarding whether President Harry Truman (1884-1972) was right to give the final order to drop the bombs rages on.   The images taken in Japan following the bombings are still shocking even today and upsetting for many viewers.  And for many others, the concern remains that the world could once again see a nuclear weapon used in warfare.  It is commonly believed that August, 1945, was the only time atomic weapons had been used in combat.  But what actually constitutes “use”?  That is a question Daniel Ellsberg addresses in this chilling and eye-opening account his time as a nuclear war planner.  Some readers may be familiar with Ellsberg’s name due to his surrender, trial and the dismissal of all charges related to the Pentagon Papers which revealed the mistakes and poor judgment that allowed the United States to go to war against North Vietnam.  In fact, Ellsberg’s papers were the target of the crew of burglars that would go on to be discovered at the Watergate Complex. Their arrest and the cover-up by Washington helped lead to the resignation of Richard Nixon.  Incredibly, Ellsberg has outlived many of the major figures from that era and what he has accomplished, learned and ultimately disclosed are facts that should concern and be known to every American.

You might be wondering, what on earth is the doomsday machine?  It is quite frankly, the system of devices that are interconnected allowing for a nuclear attack or counterattack that would result in nearly this entire planet being obliterated in minutes.  Knowing what we do today about war, we could rightly say that the next world war could very well be the last world war mankind engages in.   The nuclear weapons of today are more power and in more abundance than what was used to force the Japanese to surrender.  And should there be an attack today, the fallout could be unlike anything we have ever imagined. But how did we get here?  To answer that question, we must go back in time with Ellsberg retrace the history of the development of atomic weapons.

The story of J. Robert Oppenheimer (1904-1967) and the project at Los Alamos is one that has been told more than once and it well-known to students of history and aficionados of World War II.  But what may not be known is the instigation of the Cold War from the west and the role that nuclear weapons played in the decisions and actions in Washington.  As Ellsberg reveals, the key to understanding the severity of nuclear warfare is the Cold war and the Joint Strategic Capabilities Plan (JSCP).  This very document served as the crux of the U.S. policy towards the Soviet Union and any nation found to be its ally.  What Ellsberg reveals about that plan and the approval it received from the White House will send chills down the spine of even the most hardened readers.  As an employee of the Rand Corporation and a member of high clearance personnel at the Pentagon, Ellsberg found himself in an intimate position to access even the most secretive of documents that were deemed too important to national security to be revealed publicly.  Among these documents was annex c to the JSCP, the Single Integrated Operational Plan(SIOP).  Just as frightening as the JSCP, this plan was another document that Ellsberg introduces to us so that we can digest its meaning and how dangerously close the Unites States came to nuclear war with the Soviet Union.  And as the late Robert McNamara (1916-2009) said in the 2003 Errol Morris documentary The Fog of War “Cold war? Hell it was a hot war.”

There is far more information included in this book than I could ever review here.  But there are a few questions the reader can ask before starting the book for the answers are contained inside: Was Hitler really building a bomb?  How many nuclear weapons did the Soviet Union have following World War II?  Is the president really the only person to authorize an attack?   Was it truly necessary to drop the atomic bombs on Japan? Just how many presidents threatened to use nuclear weapons to end subsequent conflicts?   What are the chances of a false flag due to a random error?   And what can we do to reduce the risk of nuclear warfare?

I vividly recall my father telling me about the Cuban Missile Crisis and how he was required to participate in air raid drills in October, 1962 as a student in grade school.  He very frankly said those thirteen days were the scariest he can recall and everyone was filled with the fear that nuclear war would erupt with the Soviet Union at any moment.  The conflict was eventually resolved but sadly Kennedy was assassinated the following year and Khrushchev was removed from power in 1964.  Their determination to avoid conflict removed the world from the brink of a nuclear war that might have had very few survivors if any.   And that threat still exist.  Error in judgment, egos and thirst for power could combine to form a deadly nexus producing another missile crisis.  If we are to prevent a nuclear holocaust, it is our duty to study the past, heed these words by Ellsberg and actively work towards dismantling the doomsday machine.

Living with gratitude and finding joy in every day things. My poetry, essays, and psychology. I also write as Chrissie Morris Ph.D.