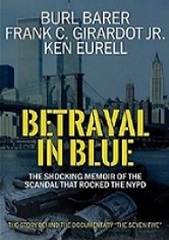 Nearly twenty-six years ago, New York City Police Officer Michael Dowd was arrested by the Suffolk County Police Department in cooperation with the U.S. Drug Enforcement Agency for the possession and distribution on narcotics. His arrest, trial before Judge Kimba Wood of the  Southern District of New York and testimony before the Mollen Commission solidified Dowd’s reputation as the dirtiest cop in NYPD history.   Arrested with him were other officers, drug dealers and other participants.  Ken Eurell was retired at the time of his arrest but during his active tenure, he patrolled the streets of the Seventh-Fifth precinct with Dowd and embarked on a path of corruption that is still unbelievable to this day.  The duo recounted their life of crime in the 2015 documentary The Seven Five.  Undoubtedly, Dowd is the main focus and his recollections are backed up by Eurell and the other former officers.  This is the story from Eurell’s point of view about how and why he found himself more deeply immersed in crime with Dowd.

Eurell starts off by explaining his family history and how he joined the NYPD.  Hi story is relatively straightforward and certainly non-eventful until he crosses paths with Dowd.  Corruption had already existed and as Eurell points out, it was quite widespread throughout the department. Incoming officers were forced to learn on the quickly and those who made the decision to inform on dirty cops often faced a career derailed from being ostracized.  Dowd is not just corrupt but takes everything to the extreme and is blessed with a mind geared for exploiting every angle possible. It does not take long for Eurell and Dowd to begin to pull off numerous capers and form a working relationship with two of the biggest drug dealers in East New York.

I lived five blocks from the 75th Precinct and remember when the story broke.  Prior to Dowd’s arrest, there at had been stories of arrest at other precincts of cops that engaged in corruption of all sorts.  Most of the people in the neighborhood were not surprised as most of the officers from the “75th” were considered to a bunch of cowboys.  Having read this account by Eurell and that of Internal Affairs Investigator Joseph Tromboli in his book Good Cop, Bad Cop, the moniker of cowboys is a huge understatement.  They were nothing short of out of control and Dowd was on a mission to self-destruct and might have succeeded in the end if not for Eurell’s decision to cooperated with authorities.

The book is shocking at times but I do think Eurell and the authors were right about what East New York was like during the 1980s and 1990s.  Having lived there at the time, I can say with all honesty that the neighborhood looked like a war zone.  Poverty was rampant, murders common and the police struggled with containing the constantly increasing criminal elements.  But what happens when the cops are part of the element? Through participation with Adam Diaz and Baron Perez,  Dowd and Eurell had crossed a line from which there was no safe return.  East New York, described by officers herein as the “Land of F*ck”, was hell on earth and the problems that plagued the neighborhood extended far beyond the reach of the NYPD and led directly to City Hall. Today, those days are long gone and the landscape bears no resemblance to what it used to look like.  Vacant lots have disappeared, crack-cocaine is no longer the drug of the street and the faces of the NYPD are now more diverse.  But the 75th is still there at 1000 Sutter Avenue and for older residents, the place that was once the source of the dirtiest cops in all of New York City.

Today, Ken Eurell no longer lives in New York, having relocated to Florida as he attempted to put his life back together again following the fallout after Dowd’s final downfall.  As he tells his story he is candid about what he did, how he was seduced by the lifestyle and the pain he inflicted upon his own family.  He does not ask for sympathy, freely admits where he went wrong and never portrays himself as a victim or hero.  This is simply his part of the story and I think a good supplement to Tromboli’s book and the documentary. I would go as far as to say that if you have watched the film and read Tromboli’s book, then his is another piece of the puzzle.   Some of the information is revealed in other places but I do think Tromboli’s book contains a bit more because it is told from the side of Internal Affairs so he is able to convey what was known about Dowd and when NYPD brass knew it.   Some readers might be tempted to ask how did they get away with it for so long?  The answers are in the book and they just might surprise or even shock you.  But this was New York City in the 1980s and 1990s, when it was one of the most dangerous cities in America before gentrification arrived.

I often think about my childhood and early adult life in East New York.  Many of my friends have long left the neighborhood and I no longer live there myself.  But we all carry many memories and they will remain with us for the rest of our days as I am sure they will for Dowd and Eurell.  The East New York they knew is different today and if the City is successful, it will be unrecognizable to them in just a few years.  But no matter how much transformation occurs, the dark history of corruption within the Seven-Five  will remain in its history.