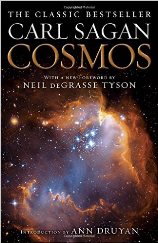 All of us at some point in our lives, have looked up at the night sky and observed the moon and stars that compose what we have come to know as the galaxy.  This world beyond the earth remains intriguing and mysterious to mankind. The possibility of other forms of life and planets that might be able to sustain the human race have fueled the fires of exploration.  Our desire to answer many of these questions, resonates with the quest to answer the biggest questions, how and why are we here?  Religion has attempted through time to provide those answers and for many believers, the scriptures are the final word.  But for other curious minds who believe there is more than can be found in a religious text, continue to explore and learn more about the world we all inhabit and the worlds beyond.   Each comes together to form what the late Carl Sagan (1934-1996) called the cosmos.   Sagan, of Brooklyn, New York, remains possibly the greatest astrophysicists in history.  He was also an astronomer, cosmologist, astrobiologist and author.  Younger readers may recall that he is remembered fondly by Neil Degrasse Tyson, a protegé of Sagan who has hosted a show also called the Cosmos.  This book and the show explore our origins and the complicated yet fascinating process of evolution.

Those of us who are deeply religions might be initially put off by the book because of the subject matter.  Sagan does not leave anything to fate or belief,  the sciences are on center stage here as we open our minds and go back in time throughout human history.  Neil Degrasse Tyson provides a foreword and Sagan’s widow Ann Druyan provides a loving introduction.   As we begin the book, it is clear that Sagan is the teacher and we are the students with much to learn.   At times, it felt as is I had been transplanted back it time to grade school science.  However, Sagan explores material that I did not learn in school and only became familiar with as an adult. In fact, it was through Sagan that I learned the story of Johannes Kepler, who remains largely ignored in mainstream science books.  Sagan gives him a proper acknowledgment as a brilliant man whose contributions to what we know today cannot be overlooked.

Kepler is just one of many names in the book that should never be forgotten.  The path to knowledge over the past several thousand years has been long and arduous with many obstacles faced by those who dared to speak out against what was thought to be “common knowledge”. Their stories are intriguing and I wonder if any of them could have imagined society would have advanced to this point in 2018.   Perhaps they might disappointed that we have not made even further progress. Regardless of what they might believe, the fact is man has evolved drastically and what we know today is in a sense light years ahead of our ancestors.

The book is appropriately titled the cosmos and it is in this area that Sagan truly shines. Forget about science fiction films about space and shows about Martians.  Here he takes us on a voyage as we explore the known planets in our solar system.  The vivid and detailed descriptions of the planets we have named, vindicate Johannes Kepler, Nicholas Copernicus and others who understood that the earth rotates around the sun.   The amount of information that is known about the galaxy is nothing short of incredible.  And even more impressive is that there remains much more to discover.

Sagan is a good author and never lets the material become too complicated.  The information is presented thoroughly but in an easy to read format.  From the start, the book pulled me in deep an I committed myself to blocking out any ideas I may have had about the universe.  At times in the book, I felt as if I were learning science all over again in a refresher course before a highly important exam.  But this is no exam, this is our world and our role in it.  Our planet is at least four billions years old.  But if that is true, what life forms existed then and what happened to them?   And are we the only species of humans that have ever existed?  Could there be  a species on another planet in the galaxy that resembles humans?  Finally, if other species do exist,  are they aware of earth and have previously discovered out planet?  The possibilities are endless and that is what makes science so interesting and Sagan’s death a tragic loss.  Yes, science continues even though he has gone but his vision and accomplishments can never be denied. And as he firmly explains, in exploring the cosmos, we explore ourselves for we are a part of the cosmos.

I firmly believe that this book should be read by everyone.   This is the world’s history in science as it relates to the origins of mankind and our understanding of the worlds around us. Sagan is gone but far from forgotten and this gift he gave us is one that continues to give.  If you have the time and are willing, take a journey with him and explore the cosmos with a mind that is irreplaceable.