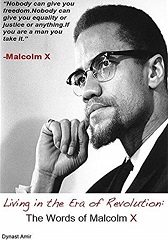 In the United States, the month of February is dedicated to African-American history.  February 21 stands out during the month as the day that el-Hajj Malik el-Shabazz better known as Malcolm X (1925-1965) was assassinated at the Audubon Ballroom in Harlem, New York City.  On the radio, the eulogy given by the late Ossie Davis (1917-2005) is played taking us back to Malcolm’s final days on earth.   In 1992, Warner Brothers released Malcolm X, the biopic directed by Spike Lee and starring Oscar winner Denzel Washington in the lead role.  Washington lit up the screen, delivering a performance for the ages.  Davis’ eulogy accompanies the closing scenes and the credits are rightly finished to the sounds of Aretha Franklin’s rendition of ‘Someday We’ll All Be Free’ and Arrested Development’s ‘Revolution’.  The film has stood the test of time and is a fitting tribute to Malcolm X’s legacy.  Lee did an incredible job but there was no way he could have included all of Malcolm’s speeches and writings into the final product.  Malcolm was brilliant, not just as an orator but as a critical thinker who presented his arguments in an engaging and articulate manner.  And some of those words can be found in this book by Dynast Amir.

Amir has compiled several selected speeches and combined them will Malcolm’s best quotes on the America in which he lived.  The book is not Amir’s story or a biography of Malcolm.  There are other books that more than serve that purpose such as Alex Haley’s (1921-1992) ‘The Autobiography of Malcolm X’.  Here, this is Malcolm at full throttle, delivering his messages to those in attendance and the many followers of the Nation of Islam (NOI).  His words are sharp and he does not mince words.  Today, many of us would find his words to be extreme, but it is imperative to remember that the America his lived in is quite different from the one that exist today.  Further, he was reacting to the injustices that occurred regularly against Black Americans and others deemed to be a minority.   The truths are uncomfortable and he forces America to look at itself in the mirror.  Sadly, some of his words are still true to this day but if make it a point to remember them, we can continue to move forward as a nation.

Although I am not a follower of the Islamic faith, I have felt that some of their beliefs about the place in society of Black Americans were correct and no one who reads this book can ever say that Malcolm did not love his people.   I firmly believe that even readers who are not Black American or African can still find truth in his words.  But for those readers, some parts may be hard to get through.  The time period in which these selected speeches come from was the turbulent Civil Rights Movement in the deadly decade that was the 1960s.  In his words, you can feel his passion and anger for the deeply rooted discrimination and injustice in American society.

As a Black American, I understand Malcolm’s view and his words are pertinent to the importance of education for without it, we cannot go anywhere in this world just like he says.  Furthermore, we have an obligation human beings to treat others with dignity, compassion and respect.  However, there was one topic which I have never felt completely comfortable with but I do hot hold Malcolm personally responsible for the belief came directly from the teachings of the NOI.  That teaching is the of the story featuring the scientist named Yakub who is believed to have created the White race.  It would require too much space here to go into detail but the story itself suffers from lack of any credible evidence and could be interpreted as right-wing propaganda. Further, the NOI  has always claimed that W.D. Fard was t in 1934 is one of the several mysteries of the NOI that have never been fully explained.  It is also widely believed that the NOI was directly complicit in Malcolm’s murder.

For all of the stirring rhetoric, call to arms and critical evaluation of America, there are some bright spots in the book with the main one being his pilgrimage to Mecca.  Had he  not taken the trip to Mecca and engaged with Muslims of a different ethnicity,  his beliefs about Caucasian men and women may have never changed.  And at the time of his murder, he was at a turning point in his life as he continued to build the Muslim Mosque, Inc., an organization that could have potentially left the NOI in the shadows.  Sadly, fate intervened in a tragic way and Malcolm was silenced forever.

History will potentially remain divided on Malcolm’s legacy with his followers swearing allegiance and his detractors writing him off as a demagogue.   Regardless of what we may think of him,  we cannot deny his importance in history at the truth in his words.  If you want to learn more about what made Malcolm tick and why he had his beliefs, then read this book by any means necessary.