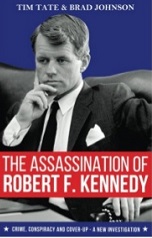 June 5, 1968 – Senator Robert F. Kennedy (1925-1968) (D-New York)  concludes his speech at the Ambassador Hotel in Los Angeles, California after scoring a critical primary victory in his quest for the Democratic nomination for President of the United States.  As he walked through the pantry while exiting the hotel, he was shot and mortally wounded.  Twenty-six hours later in the early morning hours of June 6, 1968, his life and the dream he inspired came to a tragic conclusion.  He is survived by his widow Ethel and eleven children, the youngest of whom was born after his death.  Her name is Kerry Kennedy and along with brother Robert, Jr., she keeps her father’s memory alive and well.  Her book Robert F. Kennedy: Ripples of Hope: Kerry Kennedy in Conversation with Heads of State, Business Leaders, Influencers, and Activists about Her Father’s Impact on Their Live  is a fitting tribute to her late father’s life and is yet another testament to the profound influence he had on those who knew him and even those who never met him.  His alleged murderer Sirhan Sirhan, remains incarcerated at the Richard J. Donovan Correctional Facility in San Diego County, California. The official narrative paints a picture of Sirhan being a deranged lunatic determined to murder Kennedy at all costs.  He was initially sentenced to life in prison after his conviction but several years later, his sentence was commuted to life. In the eyes of many, he is the man who killed Kennedy in an open and shut case. But there have always been questions surrounding Sirhan’s actions that night that cause many to pause before proclaiming his guilt.  Did Sirhan Sirhan really act alone and did he fire the shots that took Kennedy’s life?

Tim Tate and Brad Johnson have taken another look at one of America’s most tragic murders fifty years after Kennedy gave his last speech, examining the crime from start to finish.  And in the process they have raised many questions which have never been answered by the Los Angeles Police Department (“LAPD”) or the State of California. In fact, what we can see very clearly, is an investigation full of missteps, inaction and disturbingly, outright deceit by law enforcement.   The investigation became a mixture of destruction of evidence, stonewalling and witness intimidation as the LAPD focused its attention on Sirhan with the intention of convicting him at all costs. But as Tate and Johnson show, there were many reason to doubt Sirhan’s guilt and proof that more than one gunman was in the pantry area that night.  While they do not provide a smoking gun as to who the shooter may be, they do establish that there was more that occurred that night than police were willing to admit.  And Sirhan may not have been the person he has been portrayed to be.  We know that he did discharge a gun that night, but the authors have given reasons to believe here, that none of his bullets struck Kennedy.

As I read through the book,  at times I could not believe my eyes.  Similar to the murder of John F. Kennedy (1917-1963), Bobby’s death became shrouded in controversy as rumors swirled of a conspiracy.   At the center of the many conspiracies is the infamous  woman in the polka dot dress. The authors examine her role in the matter and give a strong explanation regarding her possible identity.  Readers curious about the mystery woman will find Fernando Faura’s The Polka Dot File on the Robert Kennedy Killing: Paris Peace Talks Connection a good read regarding this infamous figure who official remains unidentified and ignored by supporters of Sirhan’s guilt.   However,  the authors have shown that not only did multiple witnesses see the woman, some had personal encounters with her, including Sandra Serrano, a worker in Kennedy’s campaign.  Her experience with LAPD investigators is one of the most bizarre parts of the story but also reveals an important clue about the department’s motives in streamlining the investigation.  We may never know who the woman in the polka dot dress is or was, but what is clear is that she was not a figment of anyone’s imagination.

Previously, I had read material on Kennedy’s murder but this assessment of the assassination, revealed many things which I did not have prior knowledge of.  Sirhan’s trial was an easy win for prosecutors as they successful painted Sirhan with the image of a lone gunman with a deadly fixation on Kennedy.   As the shadow of Dallas hung over the trial, authorities made sure Sirhan was tried and convicted as expeditiously as possible.  However, there was one aspect of the trial that no one could completely put to rest which would come back to haunt the case until this very day.  Sirhan’s claim of having no memory of the shooting was at first dismissed but as the authors show, there was and is strong evidence to support this theory. And at this point in the book, the story kicks into high gear as a cast of characters appear including the Central Intelligence Agency (CIA).  And we are forced to ask, was Sirhan a “Manchurian Candidate”? To some, the idea sounds like another crack pot theory.  But as Tate and Johnson show, the CIA  actively engaged in mind control through several different programs it admitted to conducting, the most well-known being MK ULTRA. I would like to stress the fact that the authors never claim to have a smoking gun regarding Kennedy’s death.  However, they do succeed in providing ample evidence provides a strong basis for a new investigation into the murder of Robert Francis Kennedy.

If you are curious about Kennedy’s murder or have studied it previously, then this book is a must have.  To say it is mind-blowing is an understatement.  The authors pull no punches, leaving the reader with chills as they show the side of the investigation police never intended for the public to see.  Highly recommended.