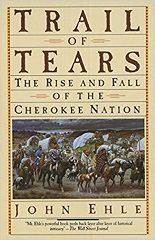 America often has an uncomfortable relationship with its past.  The dark moments in the founding of the nation are sometimes left out of history books and never discussed in conversation.  Native Americans are either viewed with empathy or disgust, typically depending on the observer’s knowledge of history.  Alcoholism, depression and economic instability have continued to plague Native American reservations, given as a token gesture by the United States Government.  In Hollywood, they have often been presented as wild savages determined to murder Americans, only to be repelled by heroic soldiers and cowboys seeking to preserve the union.  The reality however, is that there is much about the Native Americans of North America that remains largely unknown.  In the State of New York where I reside, virtually nothing is taught about the Lenape Indians who owned what is today the Tri-State area, in addition to other vast territories.  In the South, the once mighty Cherokee nation owned land, lived under their own rules and were content with life before the arrival of new  nation, created following the independence of 13 colonies from British imperialism.  Today the Cherokees are an afterthought for most, but at one time, they ruled large parts of what became the future United States of America. This is their story and that of the infamous “Trail of Tears”, that would permanently change the lives the Cherokee Indians.

John Ehle takes us back in time to the late 1700s as George Washington takes his post as the first Commander-in-Chief.  The new colonies need land and expansion is their answer.  But the land they seek is owned by Native Americans who have no desire to leave the only homes that they have ever known.  New settlers become engaged with native tribes and the stage is set for some of the bloodiest conflicts in United States history.   The Creeks, Choctaw, Sioux and Iroquois are just a few of the dozens of tribes that composed North America.  Their removal and partial extinction is similar and relevant to the current story.  And I assure you that after you have finished this book, you will look at American history quite differently.  Further, there is more to the story than just the seizure of land and it is a story that proved to be more than I had anticipated as I began to read this book.

The early parts of the book are detailed with the many skirmishes that occur as the two opposing forces become entangled in conflict.  Reminiscent of Alejandro González Iñárritu’s The Revenant, released in 2015,  relations between White settlers, French settlers and Native Americans were at times fragile and the battles deadly.  Ehle provides detailed and sometimes graphic descriptions of the brutal conflicts that developed which break down the facade of the glorious creation of America.  In fact, I warn readers easily upset that this part of the book might prove to be challenging to read.  The words are uncomfortable but so is the truth and the author minces no words.

The story has its central characters and it becomes slightly difficult to follow as they each make an appearance.  Major Ridge, John Ridge and John Ross become the power players at the top of the Cherokee command. The United States is represented through President Andrew Jackson and Georgia Governor John Forsyth, among others.  Their names and actions often intersect and the story may seem a little confusing at first but once the government’s position is established, the  narrative becomes highly focused as Georgia and Washington put the official plan into action, and the removal of thousands of Native Americans commences. It is here through the Treaty of New Echota in 1935, that the “Trail of Tears” is born and the story takes a dark and regrettable turn.

Earlier I mentioned that there was more to the story and there is one aspect of Cherokee life that is largely unknown and never acknowledge and that is its relationship with slavery in America.   It came as a surprise to me and I am sure that many Americans never learned this in school.   But it is relevant to their story and a part of history that we must understand as we continue to revisit the legacy of the United States.

Predictably, the latter part of the book is focused on the Trail of Tears itself and the deadly impact it had upon the Cherokees and African slaves, forced to march mainly by foot, from Georgia and other parts of the South, out west to Oklahoma, the territory designated for them by Washington.  The full number of people who made the journey is still up for debate but it is quite possible that up to 100,000 were forced from their homes and ordered to move west. The number of Cherokee deaths ranges anywhere from several thousand to as high as 16,0000.   Harsh winters, disease and famine combined to produce a deadly plague that took the lives of many.  And for those that did survive the journey, their lives were never the same again.   And to this day, they have never reclaimed the lives they once had.

In recent years, more U.S. States have taken the bold step of renaming Columbus Day to Indigenous People’s Day, recognizing the complicated and violent history America has with its Native American citizens.  And if we are going to continue to move forward while acknowledging  wrongdoing and correcting it, then we must first learn the true history of America’s birth.