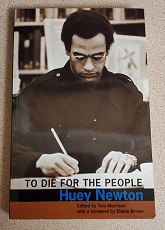 Recently, I had been revisiting material regarding pivotal moments in the U.S. Civil Rights Movement.  My focus became trained on the Black Panther Party, led by the late Huey P. Newton (1942-1989) and Bobby Seale.  The Party has been viewed in both positive and negative lights depending on the view of the person assessing its rise and effect on American society.  Newton, who later earned a Ph.D., was a charismatic and gifted orator who in turn used those skills in the form of the written word.  His autobiography, ‘Revolutionary Suicide‘, became a classic and is widely praised by those committed to revolution both in the United States and abroad.   The book was mainly an autobiography that follows Newton from his early life Louisiana to the City of Oakland, California, where he would make his name famous and infamous.   To Die for the People takes a different approach and contains no autobiography by Newton. Instead, what we find, is a collection of selected writings and speeches by Huey, showcasing his intellect as he tackles the issues of race, class, gender and even homosexuality as they relate to the movement to which he committed his life.

The book is shorter than Revolutionary Suicide but packs a punch on its own that is powerful yet dynamic enough to reach readers from all walks of life.  Early in the book,  the Party’s 10 Point Program is included as a reference. The program serves as the basis for what follows in Huey’s words that are frank and accurate.   Most of the writings come from the period of 1968 – 1971, when the Vietnam War was still raging and the Civil Rights Movement was still moving ahead in the midst of deadly political turmoil in the United States.  Hauntingly, we can still apply his words to events that take place even today.

Newton possessed a sharp analytical mind and here he breaks down many topics and assigns terms to the concepts to make them even clearer to the reader.  I thought the discussion regarding Revolutionary Nationalism and Reactionary Nationalism was highly interesting and profound in many ways.  Anyone who’s read Newtown or heard him speak, knows that he sometimes had a flair for dramatics.  However, here he is focused and determined.   There is no room for distractions, Huey is breaking things down one portion at a time.  And the he is done, it is very clear why the book is called To Die for the People.

The Party itself is also a focus of the book. Huey does not shy away from trying to understand where the Party went wrong and what is truly needed for revolution to be successful.   He touches on subjects that have proven to be an issue within the movement such as ego, different goals, religion and even the LGBT movement.  He rightly understood that unity could transcend cultural and class lines.  It could also transcend international borders.   For Huey, the revolution here was in direct relation to revolutions everywhere and this is explained under what he refers to as revolutionary intercommunalism. To Huey, the world had to undergo revolution in order to rid itself of the grip of what he feels is the largest empire on earth: The United States.

Some readers may be apprehensive about Newton’s feelings about the United States.  But I believe that in order to understand what he means, it is necessary to view it through a much different lens.  At no point in the book, does Newton say he harbors ill will towards his own country.  But what he is saying is that the actions of a select group of people have resulted in foreign policy that has helped to destabilize and nearly destroy nations worldwide.  His words were later confirmed when the CIA was forced to admit many dark secrets of covert assassinations programs and plans to move against many governments abroad.

I was curious to see what he had to say about the Party itself and he provides some insight into the falling out with Eldridge Cleaver (1935-1998) and the actions of Stokely Carmichael (1941-1998).  These sections highlight the unfortunate incidents that served to undermine the movement and the message of the Panthers.  Huey is quite frank and his accusation against Carmichael might surprise some readers.   There is no truth to them as far as I know but there are undoubtedly many secrets that are taken to the grave.  And sadly, neither Huey, Eldridge or Stokely are alive to discuss what really did happen.  Regardless, each played a critical role in the movement and Newton recognized this as both became affiliated with the Panthers.

As sort of a bonus, Huey’s review of the Melvin Van Peebles film ‘Sweet Sweetback’s Badass Song’, released in 1971.   The independent film touches on many social issues regarding Black Americans and is not the usual run of the mill production from its era.  Newton was impressed with the film and goes into detail about why he felt it was so important to Black America and his belief in the genius of Melvin Van Peebles.  If you have seen the film, you may agree with Newton or challenge some or all of his observations. Regardless, I think all can agree that the film will certainly never be forgotten by those who were part of the movement in a time where strong Black characters were needed across the country.

It has been over thirty years since Newton was gunned down on an Oakland street corner, but his wisdom, words and persona remain integral to any discussions of the Civil Rights Movement and the events in California during the 1960s.  I can only imagine what Huey would think today with regards to the current political climate and recent events across the globe.  I am sure that he would have much to say and write about where society is going wrong.   I do not know if he envisioned his premature death when he wrote but it does seem as if he knew his words would still be relevant nearly fifty years later.