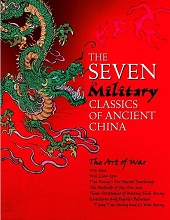 I decided to change gears and take a look at a book that had been on my to-read list for quite some time.   The Seven Military Classics of Ancient China are  some of the most widely studied writings in regards to conventional and unconventional warfare.  Putting their age aside, the texts provide the reader with an inside look into the strategies behind armed conflict in Ancient China.  And what is contained within the pages of this collection of brilliant military strategy, are dozens of lessons that military commanders can still use even today.

As the book opens, the authors provide us with a brief description which explains how the texts can be interpreted:

Canonized in 1080 ce under the reign of Emperor Shenzong of the Song (r. 1067–1085 ce), this collection of texts is as much a representation of scholarly activity in forming a military tradition as it is a matter of practical concern.

I think the statement is correct but also that there is far more to the texts which will be learned by readers.  But what exactly are the Seven Military Classics?  They are composed of the following works:

The seven classics do differ slightly in the approach that each take to the issues at hand  but the common theme is warfare.  Public administration is also given high focus and more than one book discusses the importance of ruling with benevolence and the support of the people.  But make no mistakes, these books are military strategy galore, covering fortifications, weapons, troop numbers, battlefield positions and the organization of a disciplined and effective army.   Of course, the weapons and chariots referred to in the texts are beyond outdated however what is discussed about the power of a general and the movement of troops is still relevant.  And in his eternal widsom, Wu Qi had this to say about war:

“There are five causes of war: the pursuit of fame, wealth, revenge, rebellion, and famine. There are also five types of army: strong, violent, determined, righteous, and treacherous.”

With the exception of the Art of War, the texts explore these topics in clear and accurate detail.  Similar to a fly on the wall, we are privy to the discussions between rulers and sages as they discuss the ruling of a nation and the concept of war which is an unavoidable event in the future to come.  When it comes to combat itself, without question, the Art of War is the cream of the crop.  It is the manual for engaging the enemy and waging a successful military campaign.  And out of the seven classics, it holds the biggest place in maintstream culture and is by far the most quoted.  And while it is a gem in its own right, the other classics offer just as much valuable and insightful information for leaders of nations and military commanders.

It is hard not to understate the genius behind these seven classics. And although thousnds of years have passed since they were written, the material is still captivating.  And if I were the leader of a nation, I would certainly refer to this book on occasion.  There are many lessons to be learned if readers are willing to invest their time and attention.  Today, conventional warfare is not seen on the scale that it was in centuries prior.  But there is no telling as to when the next conflagration will erupt.  But if it does, I am sure that the lessons contained in the seven classics will be on the minds of the military figures tasked with achieving victory.