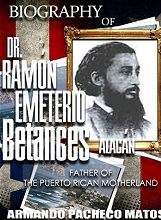 On May 12, 1898, the United States Military invaded the island of Puerto Rico, the Caribbean island once under the control of the Spanish Empire.  The occupation by the United States ended hopes of an independent Puerto Rico, the dream of Dr. Ramón Emeterio Betances Alacan (1827-1898) whom author Armando Pacheco Matos calls the “Father of the Puerto Rican Motherland”.  Betances died in Neuilly-sur-Seine, France on September 16, 1898, and did not live to see what would become of the island he loved.  Had he lived, he would have been appalled at the annexation of Puerto Rico by the United States and its designation as a commonwealth. Betances’ goal from the start was complete independence of Puerto Rico from the bruality of the Spanish empire.  Today, his name is rarely mentioned but if we want to have a discussion about Puerto Rico’s history, he must be part of the conversation. To understand why, it is necessary to read this book which captures Betances’ life and how it impacted the history and culture of Puerto Rico.

Readers who are looking for a thorough discussion of Puerto Rico’s history will not find it here.  But I do recommend Rudolph Adams Van Middeldyk’s The History of Puerto Rico: From the Spanish Discovery to the American Occupation which I found to be the perfect go ot source to learn how Puerto Rico went from a Spanish colony to a United States commonwealth.  The focus here is strictly on Betances’ life and I found the author’s work to be highly informative and the subject of this book highly underrated.  In fact, as readers will see in the book, Betances was critical to the development of Puerto Rican pride and also the history of the Dominican Republic.  He proved to be invaluable to former President Gregorio Luperón (1839-1897).  His contributions to Dominican society are duly noted and highlight his belief in true independence not just for Puerto Rico but any nation under imperialist rule.

The book is not very long but it is packed with a wealth of information and the story moves quickly.  And although it may not be an “extensive” biography, it is just what is needed to understand who Betances was. And this is where the author succeeds.  We learn about Betances’ childhood, the ramifications of his African ancestry and how his travels abroad helped form the foundation for the actions he would take later in his life.  To say that he was multi-dimensional would be an understatement.  As a polyglot, he took command of several languages and used his medical training to improve the quality of life of all Puerto Ricans and impoverished people.  His love for the Antilles is on full display as Puerto Rico contends with two foreign nations determined to take control of the island of enchantment.

Betances had formed critical alliances as his revolutionary activity increased and some of those individuals also appear in the story such as Segundo Ruiz Belvis (1829-1867), Lola Rodríguez de Tió (1843-1924) and Eugenio María de Hostos (1839-1903).  Tió may be known to some readers as the writer of the original Puerto Rican anthem.  Dr. Betances also had many people he admired and their names which will be familiar to nearly every reader provide further insight into where Betances sought inspiration as he continued to develop into the revolutionary he would later become.

While the book is a biography, the crux is El Grito De Lares (The Cry of Lares) that occurred on September 23, 1868.  The uprising against the Spanish and its aftermath are critical events in Betances’ story as readers will see. Today, we know with hindsight that independence did not come about because of the uprising.  But it did have other effects and remains to this day, one of the most significant acts of resistance against the Spanish empire that decimated the Americas through genocide and disease.  And Betances is forever linked with Lares, the city in which his vision for freedom was put into action.

As I read through the book, I did notice that there is not much information on his wife Simplicia Isolina Jiménez Carlo, who appears mainly towards the end, in particular after Betances’ death in France from where she sends out a vital letter to secure financial assistance.  However, there is not much else we can learn about her as she is not frequently mentioned in the story. Whether that is because there is a lack of information about her life or that the author chose to focus mainly Betances himself, I do not know for sure.  It does not appear that the couple had any children and there is no mention of the same here.  And I am sure that there ae some parts of his life that may be lost to history.  However, the author does provide the names of other writings by Betances for further reading, including a snippet of the late doctor’s Ten Commandments of Free Men.

Having finished the book, I do feel that there are some gaps in the story and long periods of Betances’ life could have been explored further.   However, Matos has still provded an important and incredible story.  My only wish is that the book would have been much longer as I felt that I was still learning who Dr. Betances really was even as it ended. And I am certain that there is far more to his legacy than what we see in the book. But if you are looking for a solid introduction to one of Puerto Rico’s greatest heroes, this is the book for you.