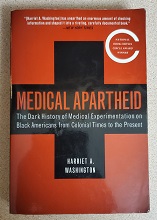 It is not often that I need a moment to myself after finishing a book but alas, it has happened once again.  Prior to reading this breathtaking and riveting book by author Harriet A. Washington, I last found myself at a loss for words after finishing David E. Stannard’s  American Holocaust: Columbus and the Conquest of the New World.  As I explained in that posting, the book was so unsettling that I needed a drink and a moment of silence afterwards.  That process was repeated upon completion of this book which is bound to jolt anyone who decides to voyeur within.  The title alone is enough to catch a person’s attention but I believe it only tells part of the story that is to be found within the pages of this book. Quite frankly, the full story is far darker and disturbing.  However, it is history as it was in all of its ugliest and rawest form.  When viewed in that context, the requirement of facing it head on becomes readily apparent if we are truly intent on fixing the disparities in health care between people of different ethnic backgrounds. In fact, in the epilogue, the author makes it clear that although the book does not paint a flattering picture of history, it is still necessary for blacks to seek medical care and participate in the health care industry as their lives depend on it.

Washington opens the story with a discussion of Dr. James Marion Sims (1813-1883) whose attempts to treat the condition of vesicovaginal fistula set the theme for the story to follow. I warn readers that the first half of book will sound like something out of a horror film.  The issue of slavery does come up and is directly relevant to the story at hand. Furthermore, what the author reveals, should put an end to any discussion of one slave having a better life than the other.  The full barbarity of the system of slavery is on full display, supported by physicians who were supposed to preserve life.  Readers who are sensitive to this subject matter may want to use discretion when deciding whether or not to read this book.  Once you begin the story, it is ride that moves full speed ahead and the author pulls no punches.  Sims emerges quickly as a controversial figure whose legacy is summed up by Washington clearly when she states:

“James Marion Sims is an important figure in the history of experimentation with African Americans because he so well embodies the dual face of American medicine to which racial health disparities owe so much.”

The doctor is only one of a long list of physicians remembered as pioneers. But as can be seen in the book, they also had a darker side which led to them committing even darker acts at the expense of blacks and others considered to be inferior or undesirable. Racial ideology cloaked under the banner of eugenics, resulted in some of the most atrocious events I have ever read about. Washington does not mince words and some of what she reveals might be hard to take even for the most stoic readers. Some of the darkest components of racism come back to life, showing American history without the glory. This truth is ugly and upsetting, and is bound to anger and appall. Today, such actions would be unthinkable and rightly subject to criminal prosecution but in the 1800s, this did not happen and the we can see in the book must how widespread the belief in black inferiority truly was, which allowed doctors to put into practice thoughts that are completely insane.

Any discussion of American medical experiments would be incomplete without commenting on the Tuskegee Experiment. The story is included here and Washington does an excellent job of summarizing what did happen and clearing up misconceptions that have festered for too many years. It is an honest and thorough discussion of a medical experiment that went terribly wrong and carefully hid the truth for those taking part as test subjects. It remains one of the darkest chapters in American history but it far from the only one. In fact, there were others and Washington takes us down memory lane so that we can see just how disturbing these events truly were. As I read through the book, I found myself aghast not only at the bizarre thoughts of physicians such as being able to negroes white, but at the unnecessary procedures that were carried out under the guise of black patients not feeling pain the way whites do. These parts of the book are a reminder of how primitive medicine was less than two hundred years ago. They are also a reminder of how far we still have to go in eliminating the disparities that exist in our health care system that have been fueled by bias for far too long.

Some readers may be triggered by this book for it pulls back the curtain on what we have been told was a storied medical history that placed America at the forefront of scientific advancement. In prior years, Margaret Sanger (1879-1966) was seen as a champton of reproductive responsibility as the founder of Planned Parenthood. Yet Sanger also had a dark side and her true goals were left out of official narratives. Washington takes another look at Sanger and readers will either be surprised or vindicated in their beliefs about her. What is adamantly clear is that the times in which she lived , certainly contributed to her views which today seems nothing short of draconian. She was part of a growing eugenics movement, perfected in Nazi Germany and nearly replicated many times over after World War II. Concentration camps were replaced by medical laboratories and covert plans enacted by intelligence agencies including American’s own Central Intelligence Agency (CIA). Operation Big City is a name I was unfamiliar with but its purpose which has never been confirmed by the CIA, should make the hair stand up on the back of anyone’s neck. If it really did happen, then it speaks volumes about America’s darkest secrets. And for readers who cannot imagine the U.S. Government being involved in anything nefarious domestically, I do recommend that research Operation Northwoods, which was presented to President John F. Kennedy (1917-1963) by the Joint Chiefs of Staff as a pretext for an invasion of Cuba.

To say that there is a wealth of information in this book would be a severe understatement. Readers should be prepared to have their minds blown. Just when you think that the story might be winding down it picks up even more of a pace as the revelations keep coming. And as they do, it should be perfectly clear why Black Americans are distrustful of the medical field and tend to received less medical care than their white counterparts. And that is really Washington’s goal. She is showing us how and why blacks came to view the medical field as harbingers of death and destruction. Civil rights and basic human decency were nowhere to be found as doctors were left to their own devices with free reign to wreak havoc on the bodies and minds of black people.

I want to reiterate that this book is not an easy read and there is no happy ending. Much of it is haunting and reveals a very dark side of human nature that some of us may be shocked to learn of. These are the events in history that were never included in history books. It is America’s history and a legacy of medicine gone horribly wrong. The endless number of victims is staggering and some are still alive today. This book is a testament to their struggles and the long road out of the darkness upon which we are still traveling. And may Washington’s work stand as compendium of a key component of the African-American experience in America.

“I challenge us to change, because as Charles Darwin once observed, “It is not the strongest species that will survive, nor the most intelligent, but the one most responsive to change.” – Harriet A. Washington

Living with gratitude and finding joy in every day things. My poetry, essays, and psychology. I also write as Chrissie Morris Ph.D.