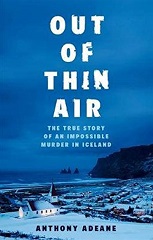 In 1974, the feelings of innocence and safety that  were pillars of Icelandic society, eroded when two men disappeared and were later presumed dead.  The crimes brought home the reality to thousands of Icelanders that even their nation could experience what was believed to only happen in other places such as America. On January 27, 1974, Gudmundur Einarsson disappeared after leaving a nightclub in the area known as Hafnarfjordur.  Ten months later, Geirfinnur Einarsson disappeared after receiving a phone call from an unknown caller.  He left home in a hurry and his car was later found abandoned by authorities.  The bodies of both men have never been found.  The cases would have remained cold if not for the arrest of a young couple for embezzlement.  Erla Bolladottir and Saevar Ciesielski’s apprehension by police eventually set into motion a chain of events that resulted in the convictions and imprisonment of six people whose names continue to carry the stigma of Iceland’s worst killers.  Kristjan Vidar Vidarsson, Tryggvi Runar Leifsson, Albert Klahn Skaftason and Gudjon Skarphedinsson joined Erla and Saevar as defendants in the cases that polarized an entire nation.   At first glance, the story seems simple, two kids were caught committing a crime and then confessed to other crimes wherein they implicated previously unknown co-conspirators.  But upon closer inspection, many problems arise with the official story and to this day, there are  many unanswered questions. Anthony Adeane traveled to and from Iceland for several years conducting research for this book and what is contained in its pages has caused me to take an even deeper look at a case that had already caught my attention.

Netflix premiered a documentary of the crimes, also under the title of  Out of Thin Air, in which Erla and Gudjon give interviews. Albert is still alive but has refused interview requests and as Adeane reveals, he was advised not to approach Albert at all for his own safety.  The documentary is incredibly well-done and leaves the viewer with a feeling of confusion about the actions of investigators and the “confessions” of the accused.  And while I enjoyed it immensely, I believe this book presents the story with even more emphasis on the controversial narrative maintained by the Icelandic Government.  Similar to the documentary, Erla plays a central role as Adeane recounts their conversations during his many trips to the small Scandinavian nation in the Atlantic.  The taint of the case is still alive and well causing Erla consternation in public to this day.  But to understand why, it is necessary to understand Iceland and Adeane masterfully includes a simple but effective narrative on the critical points in Iceland’s founding and subsequent development.   The book is not intended to be a compendium of the history of Iceland but a primer to show the reader how and why Iceland became the secluded nation that it did and why two murders which happen in other parts of the world, shook the country to its core.   This primer by Adeane, sets the stage for the future public reaction to the horror two men who disappeared under suspicious circumstances.

Those familiar with Nordic culture will readily agree that Icelandic names can be quite tough for foreigners to pronounce correctly.  At first it may be a bit confusing keeping up with everyone but as the book progresses it actually does become easier to keep track of the main characters.  The author gives the reader a helping hand by explaining Icelandic surnames which I admittedly did not fully understand before reading the book.   The names of the locations are equally as tongue-twisting but as the book progressed I was able to recall their names without much trouble.  Some would say it is not necessary to remember all of the names of places.  I do not believe most readers will but the information is there if needed.  However,  one of the keys to understanding the problems with the official timeline is the name and location of multiple places mentioned in the book. Readers who have visited Iceland or are Icelandic may be familiar with the physical layout making the book even more appealing.  For natives, this book may not be needed as these two crimes are embedded into Icelandic society.

Similar to the documentary and the real story, the other major figure here is Saevar.   He has been viewed as a Charles Manson type character with a powerful influence over others.  But just who was the real Saevar? And was he the evil genius who imprisoned others under his powerful influence as authorities made people believe?  Adeane covers his life and includes information that did not make it into the documentary.  Saevar’s life is a tragic as the story at hand.  The same can also be said for many of the other figures.  I believe if the filmmakers had more time, perhaps they could have included more information about the two mysteries that become even more bizarre each time they are revisited.  As the book progresses, Saevar emerges as the most tragic of the figures who was never able to move forward in life after seventeen years in prison. Sadly he is no longer here and if his name is eventually cleared, he will have no way of knowing or rejoicing in the fact that his life’s mission had been successful.  For Tryggvi,  it is also too late and the six hundred plus days that he spent in solitary remained with him until the day that he died. Gudjon is one of the few still alive but today is a shell of his former self and the image of a man who has carried a heavy burden for many years as a result of a case that destroyed many lives.

Some readers will wonder why did they confess if they had not committed the crime?  It is a crucial question and Adeane explores that topic from an unbiased angle that I believe shows very plausible explanations.  There are those who will come away from the book and believe that yes, there were in fact guilty and confessed as they should have.  But others will become even more convinced that something went terribly wrong in the investigation by police and several young adults were “chosen” to take the fall for a crime that they could not have possibly committed.

More than forty years have passed since the events at hand occurred.  Iceland is a very different country today with a large portion of its economy derived from the tourism that hardly existed at the time Erla and Saevar were hatching many of their get quick rich schemes.  Several of the others had been in trouble with the law before but none had ever committed the crime of murder.  There is a chance that history will absolve them and Anthony Adeane puts their plight is a very critical light ripe for further reexamination.  The courts in Iceland have resisted efforts to reopen the investigations but someday the efforts by many, including the author, may prove to be what is needed to finally clear the names of Erla, Saevar, Tryggvi, Albert, Gudjon and Kristjan.   And maybe someday the truth about the fates of Gudmundur Einarsson  and Geirfinnur Einarsson will finally be known.  This is a direct and fascinating look at the two cases that developed out of thin air.