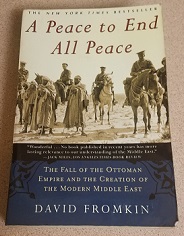 Ideology is sometimes as powerful of a tool as violence and in some cases has been the direct cause of violence. In the Middle East, ideology has maintain a stronghold as it finds itself on a crash course with modernity.   Those who live outside the Middle East are at times confused and mystified by the traditions and events that occur throughout the Arab nations.   In fact, many of us here in the United States do not know how the modern-day Middle East came into existence.  To them, I say that the key to understanding the Middle East is to retrace its history to see why and how it developed into what we know it to be today.  David Fromkin lends us a helping hand in this incredible historical investigative account of the fall of the legendary Ottoman Empire and the creation of a region that would never truly know peace.

I find it a bit ironic that the title is called A Peace to End All Peace because when the reader has finished the book, he or she will see that is far from what happened.  But the question is why not?  To find that answer, we revisit Constantinople, headquarters of the empire, prior to the outbreak of World War I.  Iraq and Jordan (formerly Transjordan) had yet to be created.   Iraq was then known as Mesopotamia and Jordan was still part of Palestine.  The Zionist cause was still in its early stages and it would be several years before the signing of the Balfour Declaration. Regardless, these nations were caught in the middle of a bitter conflict as Britain and Russia took on the German Republic for control of the Ottoman Empire.  But as casualties mounted and victories were won, what was really transpiring behind the scenes?  And who were the major players?  As we step back into time with Fromkin, we are re-introduced to long-lost figures such as the famous Winston Churchill (1874-1965),  former Prime Minister Lloyd George (1864-1945),  U.S. President Woodrow Wilson (1856-1924) and Thomas Edward Lawrence (Lawrence of Arabia)(1888-1935).   Lawrence has been transformed throughout the years into a larger than life character but Fromkin provides a good biographical sketch of him and investigates his true role in the fall of the Ottoman Empire and the British goal of conquering the Middle East.  However, as Fromkin shows us, the heart of the entire stories lies in the Sykes-Picot Agreement, the secret pledge between Britain, France and Russia to partition the Ottoman Empire after the defeat of Germany in World War I.  The agreement shaped relations between the nations for decades to come.

The story is an incredible from start to finish and after you have completed the book, you will better understand why the Middle East is the way it is today.  You will further understand how the Zionist cause for a homeland grew in strength due in part to the actions of the British Government.  The story of Palestine is especially important for the effects of the actions then are still being felt today.   Fromkin has done an excellent job of researching the topic and it is evident in his writing.  The book reads like a historical novel full of intrigue, mystery and ultimately tragedy.  Further, the relationship between Russia and the nations of the U.S.S.R. are examined highlighting the cultural diversity that once encompassed the Soviet Union.   The Bolshevik revolution is discussed but not at great length.   Vladimir Lenin (1870-1924) and Joseph Stalin (1878-1953) make appearances but their story is only discussed regarding its relevance to the current topic.  And throughout the book, developments in other nations are mentioned but the author never strays off topic.   Like a master professor, he keeps us on course throughout a critical time in the history of the world that was complicated to say the least.

The book ends before the rise of Adolf Hitler and the start of World War II.  And it would not be until 1948 that the nation of Israel was formally created.  Readers may be surprised to reach the end of the book only to find that the story does not continue in the next decade.  But the reality is that was never the intention and is irrelevant to the story at hand.  True, the events in this book would affect the future in many different ways but that is a topic for another discussion.  For those who wish to understand how an Empire came crashing down, the development of the modern-day Middle East and how several nations underestimated the power of the Islamic faith, this is a great place to start.  And for others who have an active interest in the Middle East, this book is a much welcomed addition to any library.