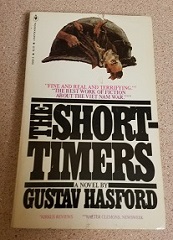 The late Stanley Kubrick left behind a collection of films that have stood the test of time and have been used as inspiration by filmmakers to this day.   Known for such hits as The Shining and A Clockwork Orange,  his legacy continues to grow in American cinema.  In  July, 1987, Warner Brothers released Full Metal Jacket, Kubrick’s gritty portrayal of the Vietnam War focusing on the Marines and their role in the conflict.  The film is considered a classic and the performances by several actors are still revisited today.   Presented in two parts, the first shows the young men as they learn to become marines and the second, their experience in the war.  The film, as it is widely know, is based on of this novel by the former and late Marine Gustav Hasford (1947-1993).

Thoroughly entertaining from start to finish, the short novel pulls the reader in refusing to let go.  We are introduced to the characters of Joker, Cowboy, Animal Mother, Rafter Man, Doc Jay and Capt. January, all of whom make an appearance in the film adaptation.  The notable differences are the characters of Sgt. Gerheim and Alice.  In the film they are changed to Sgt. Hartman and Eightball.  Because the book was written by a former Marine, military jargon, comradeship and the pride that comes with being a Marine is found throughout the book.  Hasford did a masterful job of taking the reader into the battle zones with Joker, Alice, Animal Mother and the unit to witness the terror, fear and carnage that is war.   He followed up this book with ‘The Phantom Blooper’ and had planned a third book but died before it could be written.  This novel has been called the best work of fiction about the Vietnam War and Full Metal Jacket is a film full of unforgettable performances and memorable scenes.  Next to Oliver Stone’s  Platoon and Francis Ford Coppola’s Apocalypse Now, it remains one of the best films about the Vietnam War.   However, Hasford’s novel is even better and those who love the film will find this book to be priceless.

finding joy in every day things. No location given, ever. My poetry, essays, and psychology. I also write as Christina Morris Ph.D.