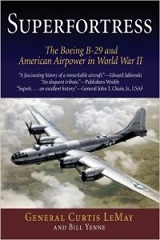 The second world war marked a turning point in world conflict with the introduction of the B-29 bomber.  No longer solely relying on ground infantry divisions, the rules of engagement had been changed forever. General Curtis Lemay, the legendary Air Force General and leader of the Strategic Air Command presents this excellent writing of the story behind he development of the B-29 bomber, appropriately named the Superfortress.

Lemay provides a detailed history of air warfare in the United States armed forces paying homage to Billy Mitchell (1879-1956), considered by many to the be the father of the United States Air Force.  Dismissed for insubordination, Mitchell would be blackballed for several years until 1941 when the B-25 was named in his honor.  Sensing that a major offensive change was needed in the war, development began on new aircraft to turn the tide of the war against the axis powers.  Boeing’s production of the B-29 signaled the dawn of a new era and completely changed the face of the allied effort in World War II. This is the great story behind the masterpiece machine and one of the greatest times in aviation history.