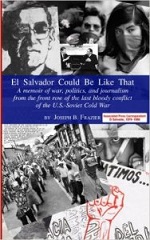 It’s often said that everyone comes into your life for a reason.  Fairly recently, I became acquainted with a lovely young woman who has since become a very close friend.  She was born in El Salvador and forced to flee her home with her family during one of the worst civil wars in modern history.  Because I was quite young at the time of the conflict, my knowledge of the situation and the experiences of the survivors was severely limited, making it difficult for me to offer any meaningful comments to her story.  However, I listened thoroughly and have never forgotten what she’s told me and it was through her stories that I began to further understand the turmoil that continues to plague Latin America to this very day. Recently I read the autobiography of retired marine Oliver North.  Most readers will remember him from the Iran-Contra scandal in the mid 1980s during President Regan’s administration.  Forced to be the scapegoat following congressional hearings into the intelligence activities to free hostages in Libya and fund the contras in Nicaragua against the Sandinista National Liberation Front, North faded into the background and now lives a quiet life far removed from his former activities. It was in this book that I began to understand the events that occurred in El Salvador, why they happened, who is to blame and why they should never be forgotten.

Based on my reading of North’s book (my review of which can be found here),  Amazon recommended this short book by Joseph B. Frazier, a correspondent for the Associated Press and Vietnam veteran who covered Central America extensively during the 1970s and 1980s.  These are his memories of his time in El Salvador during the country’s bloodiest era.  Caught in between a fierce battle between a U.S. backed government and rebel forces led the by FMLN, civilians, missionaries, journalist and even clergy would be murdered, the most notable of which is the late Father Oscar Romero, played by Raul Julia on the silver screen. The war raged for 12 years before both sides agreed to a truce in 1992 at The Chapultepec Peace Accords in Mexico, City.  Twenty three years have passed since the treaty, and today, not much is said about the small Central American nation.  American has long forgotten about the contra scandal and news from El Salvador barely makes it on to American television.  Gang violence has surged and the nation finds itself in a battle against crime almost as deadly as the battle between the Duarte administration and the FMLN. Second to Honduras, it has one of the highest murder rates in the world and the battles between far-left and far-right political parties continue making the future of the small nation uncertain.  While steps toward improvement have been made, there is still much work to be done. But as long as there are those willing to make it happen, it gives hope and inspiration for others to follow suit.V While it may be easier to forget the civil war that nearly destroyed a nation, doing so would be an incredible injustice to the many innocent victims who gave their lives in an effort to promote peace and change.  It is through books such as these and the testimonials of survivors that their lives are never forgotten.

One thought on “El Salvador Could Be Like That: A Memoir of War, Politics and Journalism on the Front-Row of the Last Bloody Conflict of the US-Soviet Cold War- Joseph B. Frazier”