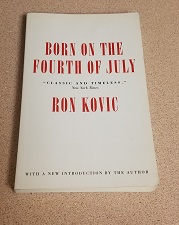 On January 20, 1968, Ron Kovic was shot and critically injured while leading a reconnaissance mission near the village of My Loc north of the Cua Viet River.  The injury leaves him paralyzed from the waist down.   After being transported back to the United States, he is moved to the Bronx VA hospital and witnesses first had the substandard treatment given to soldiers injured in the conflict.  Upon his discharge, the young marine leaves the hospital a changed man forever, no longer an innocent 18-year-old kid with dreams of being a rough and tough marine. As outcry against the war continued to grow and he began to read literature given to him by his cousin’s husband, his views on the war began to change and he eventually became one of the most outspoken anti-war activist in country.

This autobiography is Kovic’s life story and what he has learned before and after Vietnam.  The Long Island native of Massapequa, brings us back to a time where communism was the paranoia gripping the country and southeast Asia, the hotbed of U.S. military intervention.  The book at times is haunting and reminds the reader of the horrors of war.  Following the U.S. invasion of Iraq in 2003, he revised the book adding a new foreword.   Thirteen years have passed since the invasion of Iraq, but Kovic’s words were prophetic and his wisdom unchallenged.  Movies and documentaries sometimes glorify war, but this is the view from a side we often never see.  A deeply moving account, Kovic is the living example of the horror of war that can afflict any young man or woman.  His story is so moving that in 1989, director Oliver Stone released ‘Born On The Fourth of July’, Kovic’s life story in which he is played by actor Tom Cruise.   The film remains a personal favorite and chilling look into a dark side of war.