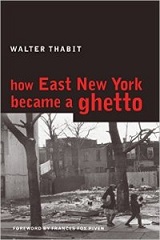 It’s been several years since I lived in the East New York section of Brooklyn.  The neighborhood is considered to be one of the roughest in Brooklyn and is the target of the DeBlazio’s administration’s plan for redevelopment.  The area purchased by John Roberts Pitkin in 1835, is one of the most misunderstood areas in the City of New York.  I still vividly recall memories of my childhood, both good and bad as if they happened yesterday.  I and many of my friends no longer live in the area.  Some of them still live in the city, but others have moved to other states and abroad.  They are now fathers, husbands and wives.  But no matter where we go in life, we will always trace our roots back to this unique and tragic neighborhood.

Lately I’ve been curious about the history of  East New York and decided to give this book a read after seeing it in my list of recommendations on Amazon.   The late Walter Thabit, a community activist and urban planner who was instrumental in the creation of many low and moderate-income housing, tells the story of how East New York, the area once filled with prosperous European immigrants became a low-income war zone filled with drugs, poverty and death.  And it is a story that is shocking, appalling and infuriating.  President Kennedy once gave a speech about the differences in the chance of success in life between white and minority babies at birth.  It’s as if he was looking straight at East New York when he said those words.   Governmental neglect of the social and economic issues, white flight and racial discrimination set the stage for the transformation of East New York from a promising area to a ghetto.

The 1968 amendment to the Federal Housing Authority which allowed the government to control mortgage contracts in the area, resulted in the foreclosure of homes across the area and paved the way for the destruction of many blocks which had nothing but flat open space on most of the blocks.   The centralization of the public school system combined with the power and influence of the UFT continued the systematic policies that had an adverse effect on the education of minority children  throughout the city making East New York was a place in which hope did not exist and quality of life was an unheard of concept.  In recent years, the area has seen a turnaround with new buildings and improvements.  It’s darkest days are in the past, but they should never be forgotten and serve as reminder of a place and time which we never wish to revisit.  The efforts of Walter Thabit, Leo Fiorentino, Rev. Johnny Youngblood, Granville Payne and many other residents to bring peace, equality and success to East New York are examples of what can happen when people work with each other as opposed to against each other.