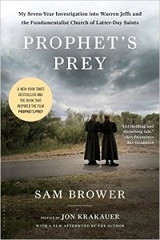 When Warren Steed Jeffs was arrested on a deserted strip of Interstate 15 in Clark County, Nevada on August 28, 2006, authorities, former members of the FLDS and victims of Jeffs’ reign of terror breathed a sign of relief.  The self-proclaimed prophet ruled the FLDS with an iron fist following the death of his father and former prophet Rulon Jeffs.  Known to be merciless and far more cunning than any of his predecessors, Jeffs went on a marriage spree, marrying girls as young as 13 and even taking several of his father’s former wives as his own.  While in prison, Jeffs admitted on a recording that he was not the prophet. However, many of his followers have refused to give up believing in him and even from a prison cell, he still wields considerable power over.

For many years, the FLDS and its inner workings were unknown to the majority of Americans.  But with the release of several important books by Rebecca Musser, Carolyn Jessup, and Elissa Wall, the veil of secrecy has gradually been lifted.  And what has been revealed has proven to be eye-opening, shocking and in same cases enraging.  The effort to bring Jeffs to justice is an interesting story but one that has been largely forgotten now that he’s behind bars.  The investigation was a concerted effort among law enforcement and child protection agencies across several states supplemented by the testimony of young women who suffered at the hands of the leaders of the FLDS and its system of child exploitation.  Saw Brower, a private investigator who played a key role in the investigation and downfall of Jeffs, recounts his own actions and the events that transpired.  His story is engaging from start to finish and shows the difficulty involved in cracking the outer foundation of the FLDS in order to bring Jeffs and the other leaders to justice.   But without the help of many courageous young women, Jeffs would still be free today.  The few that have spoken out, have given a voice to the hundreds that continue to remain secluded and oppressed.