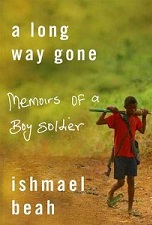 The story of the continent of Africa is one of the most beautiful and tragic we have ever seen.  The mass of land that has been described as the cradle of civilization and home to some of the most beautiful places on earth, has also been subjected to severe colonization resulting in continuing poverty, tribal and cultural division and civil wars that nearly destroyed several countries as millions of people lost their lives before the genocidal campaigns were brought to a halt.  The story of Rwanda is largely well-known, from books and even a feature film, ‘Hotel Rwanda’ starring Don Cheadle.  Rwanda, however, is not the only country to experience a crisis of that nature and as we learn in this memoir by Ishmael Beah, Sierra Leone also has a dark history of internal conflict which caused the nation to be considered one of the most dangerous places in the world.  And even to this day, their dark past continues to remain relevant.

As the British government gradually reduced its presence in the country and a transition government was formed, Sierra Leone began the first of many critical phases in the country’s history. First ruled by the Sierra Leone People’s Party, several coups would occur to bring instability to the nation and long simmering tensions rise to the surface with the deadly actions launched by the Revolutionary United Front (RUF) in 1991.  The conflict continued for another 11 years before ending in 2002.  During the conflict, the RUF and the Sierra Leone army both recruited children to participate in the  battles. Pumped up on a combination of narcotics and brainwashed by the rhetoric of their leaders, the children became killing machines with severe drug addictions.   And such is the story of Ishmael, a young boy from  a small village known as Mattru Jong, one of many towns destroyed by the RUF soldiers.  Forever separated from his mother, father and older brother, he is left with no choice but to join the many other kids left homeless and without family as the rebels continued on their path of destruction.  As we follow Ishmael, the gritty reality of the conflict is brought home as he recounts his memories of cheating death, witnesses death, indoctrination as a child soldier and his actions as a drug-riddled and fearless killer.

Aeschylus once wrote that in war, truth is the first casualty.  Many of the young boys fighting in the war found themselves caught in a battle with no clear lines defined at some points.  Marijuana, cocaine, fatigue and violence began to dull their senses, turning them into the efficient killers that were needed to carry out the most horrific acts.  And as we see later in the book, the nightmares and visions never left them and continued to plague them throughout life as they suffered from extreme post-traumatic stress disorder.  Their movement closer to the capital of Freetown, marked a sudden change in their lives, a change which many of them were not prepared to handle.  Beah’s slow transformation from child killer to eventual speaker at the United Nations in New York City is nothing short of miraculous and highlights the monumental effort needed to transform these former soldiers into young boys again so that they may have a close to a normal life as possible.  To those who are natives of the west in first-world nations, his life will seem surreal as it is hard for many of us to fathom such events could have taken place, but the reality is that in some parts of this earth, many children are robbed of their innocence and genocide is a stark reality.  From the Hitler Youth, Rwanda and even the Vietnam War,  the youth has always been a focal point of resistance and used as pawns to spread the propaganda endorsed by the forces behind them.

Today, the war is many years behind him but the memories and physical scars remain.  Beah lives in New York City and is a member of the Human Rights Watch Children’s Rights Division Advisory Committee. He has told his story on numerous occasions and given us this gift which reminds us of the importance of history for if we do not know it, we are bound to repeat it.