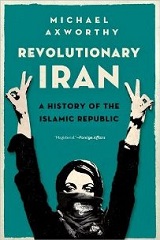 America still struggles to understand the Middle East and a large number of Americans have suspicion and fear of the religion of Islam. Acts of terrorism and reports of the extremes of Sharia law have caused many Americans to dismiss Islam as an archaic system of faith maintained by fear, intimidation and capital punishment.  Furthermore we are rarely exposed to the positive aspects of life in an Islamic state and are only shown the most extreme acts of aggression that occur.  It has been planted in our minds that Muslims around the world would like nothing more than to see the United States collapse.  Near the top of this list are the people of the Islamic Republic of Iran, a nation which shares a long and troubled history with the United States of America.

It is tempting to dismiss Iran as another nation controlled by radical Islamic fanatics determined to destroy America.  But the reality is that Iran is far from that and highly misunderstood by the west. Michael Axworthy dives into this topic and provides us with a history of Iran in an effort to explain how and why it is the nation it has become.  His efforts have resulted in an incredible and insightful look into a unique and revolutionary country.   As can be seen in the book, the key to understanding Iran and the Middle East are the Sunni and Shiite systems of belief.  They lie at the heart of much of the dissension between Iran and its neighboring Islamic nations for the largest number of Muslims are believers of the Sunni system. The conflict between the  two systems is explored throughout the book and helps the reader to understanding the forces behind Iran’s war with Iraq from 1980-1988.

Today, the focus is on Iran’s development of nuclear weapons and the incoming presidential administration will seek to enforce stricter measures than ever before.  But the question we have to ask ourselves is how much of a threat is Iran to the United States?  The answer just might surprise you.  As we learn in the book, Iran has for many years sought to emulate the western style of life. And this is one reason why the overthrow of the government of Mohammad Mossadegh was such a dark moment in U.S. foreign policy.  Mossadegh was a nationalist and believer in a free Iran but also believed in democratic processes. Shah Mohammad Reza Pahlavi returned from exile following the CIA backed coup of Mossadegh’s government and sought to modernize Iran even going as far as to try to remove the name Persia from all aspects of Iranian society. His efforts would prove to be futile and would also help engineer his downfall which came during the 1979 revolution in which Ayatollah Khomeini asserted his reign over Iran.  His administration was followed by several regime changes which resembled a comedy of errors culminating with the rule of Mahmoud Ahmadinejad, the brazen and outspoken president who seemed to walk a fine line between reality and make-believe.  Each of the rulers come with their own story and one of the highlights of the book is that their personal stories are told in detail.   At first it may seem overwhelming as a multitude of names appear throughout the book.  But they are critical for the reader because they all played a critical part in the development of modern-day Iran.

Remarkably, even with devout Islamist such as Khomeini in charge, Iran still retained some aspects of western society.  The true tragedy is the inability of the west, primarily the United States, to establish stronger diplomatic relations with the Iranian Republic. The attack on the U.S. embassy, overthrow of the Shah and war with Iraq, brought Iran into direct opposition to the United States.  What is often forgotten is Iran has never threatened American or executed any type of preemptive strike.  Their ability to inflict death and turmoil is far overblown.  But what stands out above all else is that we continue to make the same mistakes towards Iran and fail to understand the complex history of a truly remarkable nation that finds itself on the brink of modernity.  To help Iran along this trail of progression, it is imperative that the channels of communication remain open.  Some of us have friends, neighbors, co-workers and even family members of Iranian heritage.  We owe to them and to ourselves to learn the history of the place they call home. In the process we will not only learn more about them but about ourselves as well.

Iran continues to reexamine itself and look towards change.  The healing process from the war with Iraq and constant regime changes have left lasting impressions upon the Iranian people.  But they continue to hope for liberty and democracy, ideas that they have adopted from America. And as it continues to change, we can hope that the people of Iran move past the influences of despotic leaders, extreme ideology, suppression of freedom of expression, speech, women’s rights and a world opinion that has set neighboring countries against it. For those of us in the west determined to understand the true history of Iran and why it matters to us, Axworthy’s book is a good place to start.