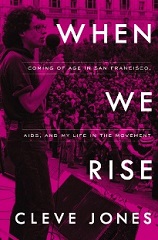 This past November marked thirty-eight years since City Supervisor Harvey Milk and George Moscone were shot and killed by Dan White. Their murders and the sentencing of Dan White to just five years in prison, led to the White Night Riots and filled the LGBT community of San Franciscans with shame and disgust.  After serving several years in prison, Dan White committed suicide in 1981.  Milk’s life was adapted for the silver screen in the Gus Van Sant directed biopic Milk. Sean Penn assumed the role of Milk in what became on his greatest performances. Josh Brolin took on the role of the film’s antagonist, Dan White and turned in an equally great performance.  They were joined in the cast by James Franco, Alison Pill, Diego Luna and Emile Hirsch who plays the role of activist Cleve Jones.  Jones is the most energetic character in the film and serves as Milk’s second in command as they take of Anita Bryant, John Briggs and Proposition 6.

Nearly forty years after their groundbreaking efforts, Jones has penned this autobiography which is not only the story of his life but also about that remarkable time in the Castro when men and women came together to effect profound change in the way Americans thought about sexuality.  And as one of Milk’s closest associates, he gives additional insight into how and why many of their decisions came about.   The film is about Milk and because Jones is a supporting character, his life is never explored except for the fact that he is from Phoenix, AZ. But was we learn in the book,  his life story is simply extraordinary and could easily be adapted for the silver screen itself.  Having been a first hand witness to all the major hurdles to be overcome in the movement, he is a treasure trove of history and knowledge.   And the revelations in the book about his life and those around him are intriguing and also surprising.   As an activist for the rights of the LGBT community, it is to be expected that he faced a severe amount of hate, bigotry and backlash for his efforts.  It is detailed in the book and will be tough for some readers to get through but it is necessary in understanding the importance of the movement in which he partook.

Incredibly, he came out to his parents at a young age, but as opposed to what is shown in the film, he had already traveled in and out of the United State and across it even before he formed his allegiance with Milk.  The early part of his life is incredible but will resonate with the hearts and minds of those who have the passion for travel. His meetings with Milk and subsequent involvement in Milk’s campaign signified the alignment of two minds united in a common cause.  Much younger than Milk, he becomes a student of the movement and quickly makes his mark.  And following Milk’s death, he became one of the loudest voices in keeping Milk’s memory and legacy alive. But what is overlooked is his life after Milk’s death which took on yet another critical turn with the onset of the AIDS epidemic.  While Milk is covered in the book, this is not the story of Harvey Milk, this is Jones story and this time, Milk is the supporting character.

Accurately portrayed in And The Band Played On, San Francisco became ground zero for the growing HIV epidemic originally believed to be a “gay cancer”.  Today we know that the term is pure nonsense and was fabricated by those ignorant of how HIV is spread. His account of the growing crisis which affect those around him is heartbreaking but an all too common story of hundreds or perhaps thousands of LGBT men and women who lived during the era.  He does not try to explain the crisis but does lend a voice to what he saw and heard through his experiences and relationships with many of the late leading figures such as activist Bill Kraus and author Randy Shilts.  And his own story is guaranteed to leave the reader both shocked and angered in regards to the political and social climate that once existed broadly in America and in some places still does.  In spite of everything that happened and his personal struggles, he is still here and his voice is still relevant. He is in an integral part in San Francisco and American history.

Jones is a lifelong activist and his work on behalf of the movement has never ended. In the second half of the book, he tells even more about the continuing movement, his role and life at the time.  The battle for marriage equality became the most important crusade and the Supreme Court’s decision deeming parts of Proposition 8 unconstitutional, became a landmark moment in the mission for true equality.  Jones was there as a witness and participant and his memories of the effort are important and a testimony that deserves both preservation and exploration.  Many years after he is gone, we will look back on his words to understand the enormous amount of work that goes into a movement and the courage that is required to face the daily threat of harm and death. This is his story, one that transcends across all social spectrums and is a historical record of pivotal times in the continuing evolution of the United States of America.