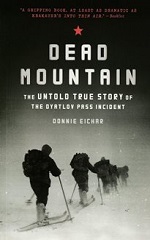 On January 23, 1959, Igor Dyatlov (1936-1959) and several of his classmates at the Ural Polytechnic Institute in the City of Sverdlosky, board a train as they commence their hiking expedition to the Otorten Mountain in the Northern Urals in Siberia.  On February 12, they are expected to return from their trip but there is no sing of the explorers, some of whom are as young as twenty years of age.  Eight days later, a formal search team is put together to find the missing hikers. Over the next several weeks, their remains are found and returned back home. Lev Ivanov is assigned to investigate their deaths and to this day, the official explanation is that they died due to some “unknown force”. The incident that has become known as the Dyatlov Pass, remains one of history’s darkest mysteries.  Donnie Eichar, a film producer and author revisits the incident in this chilling look into a mind-boggling event that is nothing short of surreal.

As part of his research, Eichar traveled to Russia and re-traced the hikers route with the help of several knowledgeable individuals such as Yuri Kuntsevich, the leader of the Dyatlov Foundation.  Leaving his girlfriend and infant son behind, Eichar exhausted his savings and pushed his body to the limit in the Siberian extreme as he searched for answers to a historical event that gains a greater aura of mystique as the years continue to go by.  At first glance, some readers may be tempted to think that the book contains a smoking gun. In fact, it does not and nowhere in the book does Eichar insinuate such.  What is contained in the book is a timeline of the events and a reconstruction of each day according to their journals and what investigators learned after their deaths.   Towards the end of the book, he does put forth a plausible explanation as to what could have happened to them on February 2.

Rumors have surrounded the case for decades. And due to the puzzling locations at which the bodies were found and the post-mortem examinations, many trouble facts arose that caused more confusion for even seasoned investigators.  Eichar lays out all of the most exclaimed theories behind their deaths, refuting each one with the evidence on hand.  And through his own work he brings our attention to the concept of infrasound or low-frequency sound. The phenomenon can be caused by environmental factors such as wind, storms and even earthquakes.  The revelation that some of the hikers had suffered internal blunt force trauma and had been exposed to high levels of radiation compounds the difficulty in solving the case.  The theory is not an official explanation but is highly plausible and puts the event in a whole new light.

We may never know what happened to those nine hikers on the night of February 2, 1959, but today, many years later, we have enough evidence and testimony to know what whatever did cause their deaths, was something they were completely unprepared for. Eichar has done his part to bring the truth about their deaths closer to light.  This is an interesting read about an even more interesting unsolved mystery.