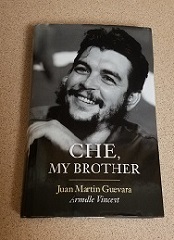 October 10, 1967 – Argentine newspaper Clarin announces that Ernesto “Che” Guevara (1928-1967) has died in Bolivia on October 9 after being capture with a group of guerrilla fighters attempting to spread revolutionary ideology throughout Latin America.  In Buenos Aires, his family receives the news of his death and is completely devastated.  Juan Martin, his younger brother, races to his father’s apartment where his mother and siblings have gathered as they attempt to piece together the last moments of Ernesto’s life.  Che was secretly buried in an unmarked grave and his remains remained hidden for thirty years before author Jon Lee Anderson convinced a retired Bolivian general to reveal the grave’s location.  His remains were returned to Havana on July 13, 1997 where he was buried with full military honors on October 17, 1997.  In death, Che’s legacy grew exponentially and even today in 2017, he is the icon of revolution around the world.  But after his death, what happened to his family and where did their lives take them?  Juan Martin, at seventy-two years old, has decided to tell his story and reveal to us many facts about the Guevara family that have sometimes been overlooked by history.

Before reading this book,  I was already familiar with Che’s story, having read Che Guevara: A Revolutionary Life, Remembering Che: My Life with Che Guevara and several others relating to the campaigns in Cuba, the Congo and Bolivia.  But I was always curious to know how Guevara’s fame affected the lives of his family.  A couple of months ago, I watched an interview with Juan Martin from Buenos Aires that appeared on the news station France24.  And it was then that I learned of his book in which he reminisces about his famous older brother.  And what I found in the pages of this book is a story that should be read by those who admire Che and even those who loathe him.  I would like to point out that the book is not a glorification of his brother.  Without question, they shared a special bond and he remembers him with fondness but admittedly, he was fifteen when Che died and did not have the decades long relationship with him that his parents and older siblings did.   Nevertheless, he shares many great details about their lives, shattering long-held myths about the Guevara and Lynch names.

In death, famous people sometimes become larger than life and their stories are retold but often misinterpreted and sometimes outright distorted.  It is well-known that Che was very close to his mother, but as Juan Martin shows, Ernesto even tested her patience at times and his relationship with his father was not as great as some have been led to believe.  They had many battles and never completely saw eye to eye on various issues but it in the end the elder Guevara supported his son and benefited from his legacy.

To understand Che’s life, it is necessary to trace the family’s origins several generations back.  Juan Martin provides a short biography to clear the record about the family name. What I found interesting is that their family life was far from upper class and was highly nomadic.  Money was usually and issues and several moves between Rosario, Misiones, Alta Gracia and Buenos Aires proved to be a challenge for the family of seven.  But incredibly, they maintained strong family bonds that were desperately needed following Che’s death. The events in Cuba would change the family’s life forever in more ways than one. What is often misunderstood is that while Che had enormous success in Cuba, his accomplishments received little to no acknowledgement in Argentina. And having been there myself,  I can attest to the fact that you will not find monuments or murals to him rampant throughout Buenos Aires. And following his death, the family would have to fear for their lives as a brutal dictatorship under Juan Peron locked the country in a vice grip and leftist organizations were persecuted beyond belief.  And it is this part of the story where Juan Martin’s life takes on a life of its own.

Juan Martin Guevara spent eight years in incarceration for suspected leftist activity.  His wife Viviana was incarcerated for an equal amount of time.  In fact, most of Che’s immediately family were forced to leave Argentina as the government initiated a crackdown on anyone suspected of being communist. And during that time, the Guevara name was suspect to immediate suspicion.  He along with millions of other Argentines lived through the tragedy of the “disappeared” in which an estimated 30,000 Argentines are believed to have been seized and murdered by nefarious elements within the government.  The Falklands War followed in 1982 and the country reached its breaking point under the government of Carlos Menem (1930-) when the convertibility system imploded and the Corralito was imposed on Argentine citizens limiting the amount of money people were allowed to withdraw from their bank accounts.  Today he is still going strong, having lived through appendicitis, hepatitis and even a heart attack while in prison.  Sadly, his older sister Celia, who he describes as being just like Che in many ways, has steadfastly refused to discuss her famous older brother, never recovering from his death and according Juan Marin, completely unaware he had written this book.  His children grew up in Cuba and now live in Europe and other parts of the world.  Four of Che’s five children still reside in Cuba where his daughter Aleida and son Camilo carry on their father’s legacy.   And Fidel, who died on November 25, 2016 makes his presence felt in the book providing many gestures of good will for the Guevara family as they made a new life in Cuba.

Che will also be a controversial figure but with this book, Juan Martin has in fact shown more of the private side of Che and relayed the truth about what their family life was really like as they grew in Argentina.  There are many parts of the book which are said and also shocking but necessary to understand the political climate that existed then and continues to plague Latin America.  In the end, this is a fitting tribute from a younger brother to an older sibling, whom he misses dearly and idolized.