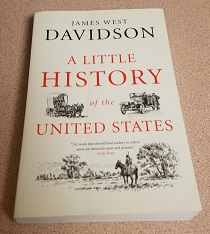 When I think back on the history classes I attended in elementary school, high school and then college, I remember that it seemed as if it took forever to go through any topic.  And that says a lot for someone like myself who has always loved the subject and still does.  For most people, history is beyond mind-numbing and often revisits events in the past to which most people do not give a second thought.  But as we are often reminded through history, we need to know our past in order to reach our future.  In comparison to the history of Europe, Asia and other parts of the world, the United States is a very young nation that has been in existence less than three hundred years. Incredibly, in that short amount of time on the world stage, some of the most memorable events in modern history have taken place in North America and had reverberating effects across the planet.  If we were to study American in its entirety, that would be a course that would last a couple of years at least.  But what happens when you cram that history into a book that is three hundred nine pages long?

James West Davidson has done just that in this book appropriately titled  A Little History of the United States.  Perhaps the word little is a misrepresentation here for there is nothing “little” about the material contained within the pages of the book.  The author straps us in and takes on a ride through time to revisit the beginning of America and the path to becoming a world superpower.  Critics might think that they already know the material in the book.  While it is true that many of the events will be known to history buffs and those that paid close attention in class, there is a wealth of information that is useful to others and might even be unknown to even those who are well-read. And as a bonus, a refresher never hurts.  None of the information in the book is ground breaking and can be found in other places but what Davidson has done is to compress all of those sources into one book that touches on all of the major events in American history.   But the genius of the book is that it is not written in textbook format but rather a story that just keeps going and getting more interesting as we move closer to the present.

Now that I think more about it, the book could be considered a cliff note for U.S. history.  There is never too much information on one topic but just enough to give the reader the basic facts and a picture of what happened and why.  Those who have interest in certain topics will surely find other material to satisfy their thirst for knowledge.  I firmly believe Davidson was aware of this when he wrote the book and might even expect that to be the case.  At one point, he mentions that he could not have included everything on one particular topic for the book would have been several volumes long.  I agree wholeheartedly.  Putting that aside, I thoroughly enjoyed the book and the pace at which he keeps the reader is just right to make it through the book without any trace of boredom setting in.

As an American citizen, I am amazed at how much history of my own country that I am still learning.  I think the same could be said about many of my fellow citizens.  Harry Truman once said “the only new thing in the world is the history you do not yet know”. No matter how much we do learn, I feel that there will always be something that we have no knowledge of.   But we have the aid of books like this to help us on our journey.  Every student of American history should have this as a supplement to all of their primary books.  For now, sit back, relax and treat yourself to a little history of the United States.