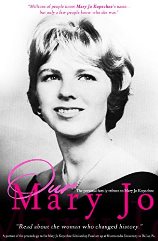 On July 18, 1969,  Senator Edward M. “Ted” Kennedy (1932-2009) lost control of his vehicle while crossing the Dike Bridge on Chappaquiddick Island, Massachusetts. In the passenger seat was a twenty-eight old former staff member of Robert F. Kennedy’s (1929-1968) presidential campaign and member of a group of women known as the “Boiler Room Girls”.  She was later identified as Mary Jo Kopechne.  In death she became a permanent part of the history of Chappaquiddick and a reminder of what happens when we are negligent in our actions.  Over time she has been largely forgotten, having been overshadowed by the lives of the Kennedy family.  And with regards to Chappaquiddick, she has been known as the “woman in Kennedy’s car”.  But the real Mary Jo Kopechne has an interesting story of her own that was cut short at only twenty-eight years of age.

Her cousin, Georgetta Potoski and her son William “Bill” Nelson, decided to tell Mary Jo’s story so that we finally have a complete picture of her short but dedicated life to the causes she believed in.   Interestingly the book is not just about Kopechne’s short life but those of her parents Joe and Gwen whose lives were never the same after her death.  The thousands of letters they received and kept after the tragedy help to shed light on just how many people their daughter had an impact on.  Some of the letters are included in the book.  The photos shown in the book compliment the story at hand and reveal a close-knit and happy family that believed in reaching one’s full potential and the importance of hard work.   The Eastern-European roots of the family’s progenitors remain intact and their story is similar to that of other immigrants who came to America to make a new life.

We all know how she perished but what is often left out is how she became acquainted with the Kennedys.  That part of the story is filled in here with even more information about her time with  Senator George Smathers before joining the Kennedy camp where she would remain up until her death.  There are many interesting facts that are revealed in particular how important she was to Robert F. Kennedy whom was known to all as simply “Bobby”.

Readers expecting to find anything about Chappaquiddick will be disappointed. In fact, the authors intentionally left it out of the book.  I understand their decision for the book is about Mary Jo and not about the incident or the investigation that followed.  To have included with have resulted in a completely different book.  This is Mary Jo’s story or more appropriately, the story of her life that remains unknown to most.   Her cousins have done a great to her memory by presenting this book which gives a permanent voice to the often forgotten victim of Chappaquiddick.