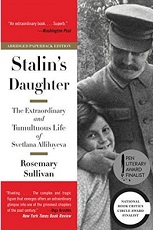 The life of Joseph Stalin (1878-1953), former dictator of the Union of Soviet Socialist Republic (“USSR”), has been the focus of endless books, articles and documentaries.  His tyrannical reign over the Soviet Union resulted in the deaths of millions of Soviet citizens, persecuted for the slightest of offenses.  The Gulag known in English as a forced labor camp, was the place most were exiled to in particular the Siberian region known for its desolate geography and brutally cold winters. The very word itself caused fear and stroked paranoia across the USSR.  No one was safe, not even members of Stalin’s family, some of whom would find themselves banished to Siberia. This climate of distrust, violence and vengeance would cause a ripple effect that culminated with his daughter Svetlana Alliluyeva’s (1926-2011) defection to the United States in 1967.  Undoubtedly, the news was explosive and if her father had been alive at the time, he surely would have issued an order for her death no matter where on earth she would have attempted to find refuge.  When I saw the title of this book, I had to take a second look.  I knew of Stalin’s family but I did not know the life story of his daughter Svetlana.  In fact, in the books I had read that discuss him, his sons are mentioned but rarely his daughter.  Rosemary Sullivan has changed all of that with this biography that is simply outstanding.

The story begins on March 6, 1967 when Svetlana arrives at the U.S. Embassy in New Delhi.  At first, she is waived off by the night guard but after showing her Soviet passport, it is clear to the guard that this is no ordinary visitor and Washington will have to be notified.  A cat and mouse game develops to smuggle the new defector out of India before Soviet officials become aware of what was possibly the greatest defection in Soviet history.  The very opening of the book is riveting and sets the stage for the roller coaster ride that follows.  But before we can learn of her life post-defection, we must first go back and Sullivan acts as the driver, transporting the reader to the early days of Svetlana’s life while her father controls the USSR with an iron fist.  This part of the book is actually the most critical.  Svetlana’s childhood and the tragedy contained within, shaped her views and actions throughout her life.  Sullivan recreates the atmosphere at the dacha where Stalin holds court, surrounded by party officials trying to curry favor with the dictator.  The charade is not much different from meetings at the Politburo.  It is an insider’s look in Stalin’s family life and the climate of fear he created that resulted in a series of events.  Among them was the suicide of Svetlana’s mother Nadezhda Sergeevna Alliluyeva (1901-1932), which had a profound effect on her young daughter and permanently changed the relationship between father and daughter.

Some readers might find this section about the Stalin household to be quite shocking.  I could only shake my head in disbelief at the number of arrests that took place of family members.  Like a master puppeteer, Stalin pulled was pulling all of the strings behind the scenes, sometimes feigning ignorance of acts that he surely would have been privy too.  Those of us who are American may find that this part of the book reinforces many of the things we heard and saw growing up with regards to the USSR.  As a young student, I easily recall how I and my friends viewed the Soviet Union as a mysterious superpower that operated on secrecy and rigidness.  To say that we only knew part of the story would be an understatement.  Sullivan’s reconstruction of the time period between Nadya’s suicide and Stalin’s death in 1953, highlights just how treacherous life could be under his rule.   History buffs will certainly love this part of the book, I know that I truly did. But suffice to say, it is only a part of the story which is even more unbelievable as it progresses.

The book takes its expected turn as Svetlana is allowed to travel to India to spread the ashes of Brajesh Singh (d.1966), whom she had intended to marry in Russia.  Soviet rules prevented marriages between Russians and foreigners but in a cruel twist of fate, she was allowed out of the country to satisfy Singh’s request that his ashes be spread in the Ganges River.  While in India, she makes the difficult decision to defect to the United States.  For Svetlana, life would never be the same again and would soon take a number of twists and turns, resulting in her moving across several continents and having to confront the ghost of her father in her homeland once more.  Following her defection, a cast of characters enter her life as friends, business associates, U.S. officials and lovers.  Her fame becomes both a blessing and a curse but she is determined to survive and find her true purpose in life.  Her personal thoughts, conveyed in letters to friends and lovers, are resurrected by the author showing the intellectual and emotional side of Stalin’s daughter.

While in America, she has another child named Olga in addition to the children she left behind in Russia, Joseph and Katya.  Her life with Olga and attempts to reconnect and reconcile with her older children are some of the most heartbreaking moments in the book.  I cannot imagine how difficult it must have been to defect from the USSR knowing her children would be left behind.  Her relationships with her older children are clearly fractured and the times where they do have contact, are cloaked under the all knowing eye of the KGB.  Svetlana’s movements and actions did not escape the eye of Moscow.  Declassified cables and memos, upon which the author relies to tie the story together, show that even Moscow did not fully know what to do at times with its biggest defector.  She had become even too hot for Moscow to handle.  And many who met her soon realized that when crossed, she was in fact Stalin’s daughter.

Sullivan has done a masterful job of putting Svetlana’s life into a chronological narrative that starts off with a bang and never slows down.  The story is gripping and refuses to let the reader go. From the very beginning I found it hard to put the book down as I continued to learn more about life in the Stalin household and Svetlana’s growth into a young woman who comes to see the truth about her father.  I do urge caution for World War II buffs though and point out that this book is not about World War II.  The conflict is mentioned but only briefly so that the story does not stray away from its intended subject.  Those looking for a discussion of the war will not find it here for that was not Sullivan’s purpose in writing the book.  This is Svetlana’s story from beginning to end and it is far more than I could have ever anticipated.

As I read the book, I found myself thinking that there were probably millions of other women and men who thought of defecting but never did.  The collapse of the USSR in December, 1991, allowed the opening of Soviet archives that revealed many ugly truths.  Svetlana believed that the election of Vladimir Putin would take Russia back to its days under Stalin.  I would hard pressed to argue differently.  The daughter of the most infamous ruler in Russian history leaves behind a life story that shows the privileges we enjoy in the west that did not exist in the Soviet Union.  It also shows that people make life changing choices when confronted with realities that change the way they see their existence and the lives of others.  Great read.