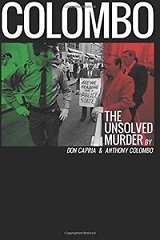 On June 28, 1971, the Italian American Civil Rights League (“IACRL” held a “Unit Day” rally in Manhattan’s Columbus Circle. The league was co-founded by Joseph Colombo (1923-1978), the former boss of the Colombo Crime Family. The mafia don had become a public figure due to his criticism of the Federal Bureau of Investigation (“FBI”) and its actions against Italian Americans. During the rally, Colombo made his way to the podium to deliver a speech when he was shot and mortally wounded by Jerome Johnson (1946-1971) who had used fake press credentials to gain access to the guarded Colombo. Three shots struck Colombo who never regained consciousness. He remained in a coma for eight more years before dying on May 22, 1978, in Blooming Grove, New York. The shooting was shown in the 2019 film ‘The Irishman‘, which earned rave reviews. The film is good  entertainment but contains inaccuracies from start to finish. Six years ago I read this book co-authored by Colombo’s son Anthony (1945-2017). I recently viewed a clip online which re-sparked my interest into the murder which never made sense. And upon reading this book a second time, I have come to see a darker unknown element at work which was determined to silence Colombo for good.

Unofficially, the murder was attributed to mobster Joseph “Crazy Joe” Gallo (1929-1972) who was known to dislike Colombo and wanted more power for himself and siblings within the family. Gallo never claimed responsibility for the murder and to this day, no mobster has ever gone on the record and tied him to the crime. The bad blood between Gallo and Colombo is no secret but no proof has surfaced that Gallo took their feud to the next level. And in this book, Colombo’s son Anthony provides even more information he learned himself after his father’s shooting that cast doubt on law enforcement’s widely accepted theory. But to understand why Colombo would have been a target, it is necessary to learn who he was as a person and that was one goal of this book. His son revisits the family’s life before the crime and peels back the layers encapsulating his father, Joseph Colombo, Sr.

I instantly took note of the family’s connections to organized crime and the fate of Joe Colombo’s own father Anthony in 1938. The events of that dark night in his father’s life, provides an eerie premonition of what comes later in the book. The tragedy was not lost on young Joe Colombo who went on to have several children of his own. Anthony recalls the day-to-day life in their home with a father determined to see his children succeed and stay out of “the life”. And with the help of Don Capria who provides snippets of historical events in each section, the book becomes an valuable tool for insight into family life within the mafia. The story is as normal as one could expect with Colombo being a dedicated family man. There are moments where he is overbearing and strictly adherent to his beliefs, but otherwise the home is stable. But when Colombo catches the attention of the FBI, everything changes and this is where the book picks up speed and never slows down.

The back story to the league’s creation is discussed and despite the accusations that it was sham and front for the mafia, the story within shows that the people behind the scenes were dedicated to the cause of civil rights for Italian Americans and the distinction between the mafia and hardworking Italians in America. However, as the FBI probed deeper in the Colombo crime family, the mafia boss went from public hero to a liability. And the FBI was determined to see him indicted and convicted by any means necessary. Readers may be both shocked and disturbed at the actions of its agents who try to get Anthony to provide them with information on his own father. Whether they believed he would do so or used it as another form of harassment I cannot say, but the term questionable to describe their antics would be an understatement. That is not to say that Colombo was an angel, far from it. We know that the mafia survived because violence was a tool often utilized to keep everyone in line. But that is why evidence is collected to prove crimes without any doubt. Without that evidence, the FBI could only harass Colombo who fought back through the IACRL. But everyone knew that the battle would one day come to a head.

In regard to the Colombo story, the pushback he was getting behind the scenes should not be overlooked. The threat of retaliation against him was high and the future of the IACRL was in question. But Colombo was determined to move forward and knew that behind the scenes, he had the support of other mobsters across the board.  However, as Anthony shows, his father did receive warnings that something dark was coming but no one knew exactly what it was. In the days leading up to the rally, there were suspicious events that took place as shown in the book. And they force the reader to ask the question, who knew Colombo would be shot? What we learn cast serious doubt on Johnson being a crazed lone gunman. Inevitably, Unity Day arrives and the moment we dread takes place resutling in pandemonium. Johnson unleashed a hail of bullets on Colombo before being fatally shot himself. The long-standing explanation was that one of Colombo’s bodyguards had killed Johnson in response, yet that person was never identified. Further, the two people with Johnson escaped through the crowd, never to be seen again nor were they identified. And just when I thought thought the story could not get any stranger, Capria’s explanation of the forensic evidence sent chills up my spine. With each page I read, my personal belief that Colombo’s murder was not a “mob” hit was reaffirmed.

But if the murder was not a mob hit, then what did happen? Well, the authors explore that question here and what was discovered is sure to make the hair on your neck stand up. And it all starts with the background of Jerome Johnson, a career criminal with a highly suspicious record. The information provided on Johnson is surreal and if he was a lone gunman, he was the craziest that ever existed to have infiltrated Unity Day and murder a famous mafia boss. Capria and Colombo also address long-standing myths about Gallo’s “close ties” to Black gangsters. This murder is shrouded in mystery and none of them leads directly back to the mafia itself. Colombo was undeniably a powerful leader who courted alliances with Meir Kahane (1932-1990) of the Jewish Defense League (“JDL”) and other social activists, and this alone would have made him a target of both overt and covert investigations. Mention is also made in the book of the role Colombo Family hitman Gregory “The Grim Reaper” Scarpa (1928-1994) played in providing he FBI with crucial information about his underworld connections. To be clear, there is no accusation anywhere that Scarpa played a role in Colombo’s shooting. There is a lot to unpack in this book which will leave you with more questions than answers. And though we know how Colombo was shot, the why remains a mystery. The shooting changed New York City history and the lives of Colombo’s family, left to grieve the act of violence that took their father known as an activist, criminal figure and a person you could speak with to discuss any problem. And it is clear is that Anthony never recovered from his father’s death. The pain in his words is evident and there is a moment in the book where he tells his dad “we can always have another league, but I can only have one father”. The full truth about Colombo’s murder may never be known but the authors have shown enough here to remove any doubt that elements of the crime remain unsolved.