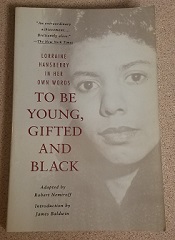 “Never be afraid to sit awhile and think.” Those words, made famous in Lorraine Hansberry’s  ‘A Raisin In The Sun’ have often reminded me of the importance of reflection when life shows signs of difficulty.   Her groundbreaking play became the first show on Broadway to be written by an African-American woman and with multiple runs on Broadway and a feature film starring the legendary Sidney Poitier, it is one of the most recognized books from that era.  This is Lorraine in her own words, revealing her thoughts about life, the future and the world in which she lived. Born and raised during the era of Jim Crow, she relays her thoughts about the United States and the struggle around the world by people of color for equality and civil rights.  James Baldwin provides a short introduction for his friend and fellow author.  The book was published following Lorraine’s death. Her ex-husband, Robert Nemiroff, collected her unfinished manuscripts and written notes, combining them into this book that explores her mind and character.

Hansberry once said that the very thing that makes you exceptional also makes you lonely.  Similar to Baldwin, Hemingway and many of the great authors, there seems to be an inner struggle for peace and emotional well-being.  She loves America but hates its actions. Her husband is white in a time when interracial marriage is illegal in parts of the country.  And it is hoped that the next work can improve on the success of ‘A Raisin in the Sun’.   Her life is a composite of many things but tragically her time was running out.  She died before she could finish many of her projects but the short passages from the writings she left behind show a developing mind on a path to even highly levels.  She has been gone for 51 years but her name continues to surface in conversation, media, film and on Broadway, the place were she became famous.  And while this book is not Raisin, it is a welcomed addition to the Hansberry collection.

One thought on “To Be Young Gifted and Black – Lorraine Hansberry”