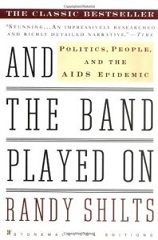 The announcement by former NBA star Magic Johnson that he was HIV+ shocked and devastated my friends and I.  Although we knew much about the dreaded disease that had taken the lives of thousands of people, there was still much that did not know.  Johnson would be considered one of the lucky few who survived an era in which we saw the deaths of tennis great Arthur Ashe and Real World star Pedro Zamora, among others including the author of this book, Randy Shilts.   When he died, I was a freshman in high school still trying to understand how and why society was now faced with an incurable disease.  Two years after his death, one of my uncles contracted the disease and died less than a year later.

What was becoming overwhelmingly clear was that AIDS was unlike anything we had ever seen before. And furthermore, it did not discriminate. Wreaking havoc on the immune system,  the disease crippled the infected person until their body just completely shut down.  Misunderstanding and misinformation lead to fear, discrimination and vicious rumors about anyone that was diagnosed as either HIV+ or having full-blown AIDS.   When HBO premiered ‘And The Band Played On’, my parents had my brother and I sit down and pay close attention.  HBO’s screen adaptation of Shilts’ bestselling novel is a critical film in American cinematic history. But our focus here in this masterpiece by Shilts of the origin of the AIDS crisis and the missteps along the way that helped it become an epidemic.

Today we can look back in hindsight with the knowledge that no one knows for certain exactly where HIV+ began.   The central figure here is Gaetan Dugas, the former Air Canada flight attendant who doctors believed to be the carrier of the disease. Dugas had confessed to having slept with hundreds of men without protection.   He eventually contracted the disease and died in 1984.  But for many years he was Patient Zero and the man doctors feared would continue to spread the disease in every place he traveled to.  While Dugas was a central figure,  he was not the only person to show the symptoms of the disease with doctors in New York City reporting similar cases year prior.  But Dugas was critical in understanding the spread of the disease as the crusade to identify and fight it began in San Francisco, the city that had attracted thousands of gay men during the 1970s.

The CDC becomes a part of the story as doctors continue to diagnose alarming numbers of patients with Kaposi sarcoma, an indicator of an underlying HIV infection.  As the body count increased, the CDC sprang into action as Don Francis, director of the AIDS Laboratory Activities began his journey to identify the cause of infection.  His mission to find a cure for AIDS and the battle between antagonist Robert Gallo and French doctors Françoise Barré-Sinoussi and Luc Montagnier are central to the book and highlight the behind the scenes wars raging as a deadly epidemic continued to claim lives while politicians ignored the warning bells.  Homophobia and hysteria took center stage as many sought to write of HIV and AIDS as a  “gay disease”.   As Shilts points out, Bath houses were closed and gay men demonized as having “deserved” the plague.  Washington dragged its feet with more than one president simply avoiding the crisis until it was far too late.  In fact, it was not until the disease began to affect heterosexuals that America began to take notice.

Today it is rare to hear of anyone dying from AIDS. In fact, people are now able to live for decades.   But there was a time where HIV and AIDS were a death sentence.  For gay men, it was essentially the end of their lives.  Before the century was over, it would claim the lives of Freddie Mercury, Rock Hudson, Sylvester, Anthony Perkins, Perry Ellis, Halston and Eazy-E, among millions of people worldwide.  The story to fight that disease that changed mankind is tragic, complicated and at times infuriating. The true ugliness that developed as egos clashed, politicians failed to act and the religious right found a scapegoat did more to prevent progress than it did to help.   And that is the true tragedy that can be seen here in Shilts’ words.

We have the benefit of history on our side and can look back at AIDS as a time in which hope was quickly fading.   Shilts and many others did not leave to see the tremendous progress doctors have made in treating AIDS.   Their deaths were not in vain and today HIV and AIDS are no longer the death sentence they once were.  But no matter how much progress is made, we should never forget the long struggle doctors faced in unraveling the mystery to one of mankind’s deadliest diseases.  And at the time Shilts wrote this best-selling book, the future was nowhere near as bright as it is now.  And this book is a testament to it and the best account of the beginning of the AIDS epidemic.

6 thoughts on “And The Band Played On: Politics, People and the AIDS Epidemic-Randy Shilts”