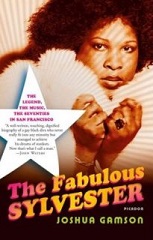 December 16, 1988-Surrounded by family and close friends, Sylvester James, Jr., takes his last breath, having succumbed from AIDS related complications at the age of 41.  The singer is another victim of the deadly outbreak of Kaposi Sarcoma, the disease which shook the United States to its core and served as the focus of Randy Shilts’ classic “And The Band Played On“.  James, who was known publicly as simply “Sylvester” rose to fame during the era of disco and gay liberation in San Francisco.  As Harvey Milk evolved into the Mayor of Castro Street and challenged Anita Bryant and John Briggs, Sylvester evolved as well and provided the anthem for the movement when he recorded the disco classic Mighty Real.   The song remains one of the best from the disco era and can be heard in Rob Epstein’s The Times of Harvey Milk, the documentary of Harvey’s life.  By the time of his death, Sylvester’s star as a disco legend had faded as the music industry changed gears and ushered in new genres of music. But for many people, he represented a time that was special, unique and composed of a sexual and personal freedom that had yet to be seen.  But just who was the real Sylvester? Who was the man behind the drag?

Joshua Gamson brings to us the story of Sylvester’s life, put together through interviews with those who knew him, interviews given by Sylvester on various occasions and public records. The result is a definitive biography of an unorthodox star who lived life on his own terms and faced death with unrelenting stoicism.  The temptation to label Sylvester is strong but as we make our way through the book, we come to see that he is not defined by any particular adjective.  His odyssey from cabaret singer to superstar was  a course not without adversity.  Yet his ability to see beyond the limitations placed upon him by society and willingness to step outside of social constrictions earned him a following and a legacy that continues even today.

His musical recordings speak on their own but his personal life rife with his struggle to find himself, love and a sense of being, reveal a side to his life that often went unnoticed. It has been said that artists of all types live in a different world from the average person. For Sylvester this rings true and is exemplified in the book in his relationships and encounters on the gay scene.   And the true tragedy is that for a man who brought love to so many and helped people discover their own happiness, his own life was one marred by sadness and rejection.  Up to the time of his death, he struggled to find that everlasting peace which so many of us seek to find.  Yet he remained the iconic Sylvester, a queen of the disco era and the man who supported the gay revolution with music that reigned supreme.

Enormous progress has been made for the LGBT community in the decades since Sylvester’s death.  Had he lived I think he would be satisfied by what he would see today.  His music and voice are still part of the revolution and he is truly one of the music industry’s most memorable stars, not only for his outlandish wardrobe but incredible singing voice that was like no other.  This is Sylvester, his story, the good, the bad and the tragic.  Gamson invites you to take a seat and partake on the ride that is the life of Sylvester.  In the end you will come to know another side of a music legend and understand why it is so important that you feel mighty real.

“Until I call you up and tell you that I’m dead, don’t believe it” -Sylvester