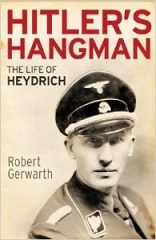 On June 4, 1942, Reinhard Heydrich died from injuries he sustained several days earlier in an assassination attempt carried out by Czech exiles trained by the British Operations Executive.  He is only thirty-eight years of age.  The former SS-Gruppenführer left behind a widow and four young children. His death sends shock waves through the Nazi regime and causes Hitler to erupt in a monumental rage.  Shortly thereafter, the small village of Lidice is seized by the Germany army and razed to the ground as retribution of Heydrich’s murder.  And as Hitler proclaimed, it was erased from the earth permanently.  Lidice is mentioned in documentaries and books about the Third Reich and serves as an example of the unrestrained barbarity used by the regime to crush any opposition to the expansion of German rule.  In death, Heydrich is turned into a martyr and is held in high regard as the poster boy for the Reich’s belief in racial superiority. Several years would pass before the Third Reich collapsed and Germany was forced to surrender to the Allied forces. The loss of the war and the exposure of the criminality of the leaders of the Reich, cast devastating blows to the supremacists rhetoric employed by the fanatical Hitler and his subordinates.  Heydrich had remained a martyr in the eyes of many Germans throughout the war but the reality is that his story is much darker and far more sinister than meets the eyes.

Robert Gerwath has composed this outstanding biography of the officer Hitler called the man with the iron heart.  Following the invasion of Poland on September 1, 1939, the Reich began to annex smaller neighboring countries typically by coercion but in some cases, through armed invasion. In the process, military commanders were appointed as as rulers in the newly acquired territory.  Heydrich, whose final post was as the Acting Reich Protector of Bohemia and Moravia, served as the agent of death and is said to have been even more ruthless than his mentor, the infamous SS Reichsführer Heinrich Himmler.  He ruled with an iron fist and set an unwavering goal to expand Germany domination across Europe beginning with Czechoslovakia which he intended to make completely Judenrein (Jew free). His vindictiveness and insatiable thirst for blood lead propelled his ascension to the top of the Reich and earned him a position as an architect of the dreaded Final Solution.

I forewarn the readers that his story is not pleasant at times and there are many disturbing aspects of his life which are shown in the book.  The horrors of the Holocaust and the extreme ideology embraced by Heydrich are just one example of the campaign of death the Nazis unleashed across Europe.  But for those who are able to tolerate the facts as they are revealed, you will find that the book is a great examination of his life and career. He died several years before the war’s end and was not able to join his co-conspirators in the defendant’s section. Had he survived the war, I believe he would have been led to the gallows like other high-ranking officials.   More than 70 years have now passed since the world’s deadliest conflict raged but we can still look back at those who played critical roles in its development and execution.  And as we look back, we have stories such as this that show us what evil truly looks like.