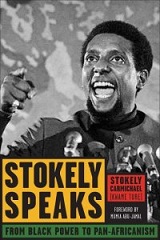 On November 15, 1998, Kwame Ture died at the age of 57 in Conakry, Guinea following a long bout with prostate cancer.  Ture was formerly known as civil rights activist Stokely Carmichael.   Carmichael, a native of Port of Spain, Trinidad and Tobago, became a leading icon of the American civil rights movement as head of the Student Nonviolent Coordinating Committee.  His writings and speeches on equality, integration and the advancement of minorities are some of the most passionate ever recorded and are widely read and studied by students of the movement and revolutionary ideology.

This collection of writings takes us back in time during a turbulent time in American history that some believed would result in the downfall of the United States.  For others, their belief in the government would be permanently altered following the assassinations of Medgar Evers, John F. Kennedy, Dr. Martin Luther King, Jr. and Robert F. Kennedy.  And even today, the 1960s ranks among the most dangerous and feared decades in modern American history.

The United States has changed dramatically in recent years, but not too far in the past, the political, social and economic landscape of this nation was vastly different. There are those today that believe nothing has changed, but instead, things are more carefully masked.   However, I do believe that if Stokely were alive today, he would be proud to see the many steps forward that have been taken and optimistic about the work that lies ahead.   As we do move forward in building a better nation, it pays for us to revisit his writings as they touch the very core of the American soul.  Stokely forces us to confront our basic human nature and re-examine everything we thought we knew about racial discrimination, war, poverty, capitalism and politics.  And like a master surgeon, he methodically dissects each subject putting it into a completely different perspective that some of us have never considered.

Perhaps one of the biggest tragedies of the civil rights movement, is that much of the outstanding literature published during the time is scarcely revisited and on the brink of being lost to future generations.  The voices of Che, Malcolm, Fidel, Fanon and Chairman Mao are relics for the youths of today.  However, it’s often said that in order to know where you’re going, it’s important to know where you come from.  Stokely does his part in helping us figure out both.