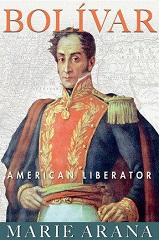 In the annals of Latin American history, perhaps no other figure is as studied as Simón Bolívar (1783-1830), the liberator of South America.   Former Venezuelan President Hugh Chavez (1954-2013) famously spoke with images of Bolívar behind him as he sought to transform the country into a contender on the world stage. The life of Bolívar lasted less than fifty years but within two decades he became the leading figure in the Latin American movement for independence from the Spanish Empire. The nations of Colombia, Peru, Ecuador, Venezuela, Panama and Bolivia (his namesake) are the products of his vision, a united South America free from the influence of its northern neighbor.   And prophetically, many of his beliefs about the future of South America have come to pass, cementing his legacy as one of the continent’s greatest heroes.  Marie Arana, a native of Bolívar’s beloved Peru, has composed a stunning biography of the late figure that shows a complex character, driven by ideology but crippled by his own generosity and disregard for personal well-being.

On July 24, 1783, Don Juan Vicente and Doña María de la Concepción Palacios y Blanco welcomed their fourth child into their growing family but neither of them could have imagined then that their son would one day become the liberator of South America.  To understand the mind of the future leader, it is necessary to understand his past and Arana presents his story in a format that is guaranteed to pull the reader in.  The story takes us back in time where the Spanish Empire controls nearly all of the continent and a young Bolívar is learning about colonialism first hand.  Tragedy became a part of his life from an early age as the deadly disease known as tuberculosis wreaks havoc across the continent.  What is clear however, is that from a young age, the rebel the world would come to know was being crafted through life experiences and the ugly hierarchy of exploitation and racism used to subjugate those considered to be unworthy by the Spanish monarchy in Madrid. The young revolutionary proved to be a fast learner and before long, he became part of the growing movement for freedom.

The book continues to heat up as Arana brings the past alive allowing us to follow Bolívar as he traverses Latin America, covering more ground than any of the greatest warriors in history. But the campaign was far from easy and behind the scenes, back door deals, treachery and in some cases luck, combined to push forward the independence movement.  And as Bolívar rises through the ranks, a cast of characters develops, increasing the suspense in the story as the final showdown with Spain looms in the horizon.   The author increases the suspense as the book moves forward, making it impossible for the reader to stop.   I found myself captivated as I followed the events that culminated in the legendary battles that chartered a new path for Bolívar and millions of South Americans.

The battle of Ayacucho in the Peruvian War of Independence proved to be the straw that broke the camel’s back with the Spanish Empire withdrawing the majority of its forces from South America. For Bolívar this was just the beginning of a long struggle that would see the continent nearly tear itself apart and result in his exodus from the place he called home.  Assassins, opportunist, traitors and cowards became major players in a deadly game of treachery that ensued following the continent’s liberation from Spain.  Arana puts all of the players and pieces together in a narrative that is both shocking and disheartening.  And through the story, we can clearly see the development of the Spanish Empire’s system of racial hierarchy  that has remained with Latin American society to this very day.  Fully aware of this, Bolívar made it a point to include everyone in his campaigns with the belief in his heart of a truly united and free Latin America.

Before he died, he recorded a statement regarding the lessons he learned after two decades of service in the revolution.  Hauntingly, his words proved to be correct and to this day, Latin America has never been able to eradicate the very issues proclaimed by  Bolívar in 1830.  And if he were alive today, he would be discouraged to see that he was correct.  Nevertheless, he did succeed in liberating Latin America before greed and deception caused infighting among the new republics that has never fully subsided.  But perhaps one day, we may finally see a truly united continent, free of demons from Spanish and British rule and the dreadful effects of the systems of class division and slavery.  And in that moment, the spirit of Bolívar will truly live on.

The story at hand is one of courage, love, triumph, betrayal and vindication.  Bolívar is long gone but his name and legacy continue to live on.  Marie Arana has done a great service to a legendary historical figure who changed the course of world history and paved the way for the birth of a new South America.