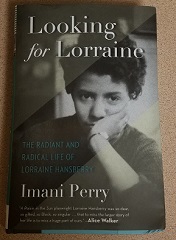 This past Saturday was the fifty-fourth anniversary of the death of the late American playwright and author Lorraine Vivian Hansberry (1930-1965).  Her untimely death at the age of thirty-four silenced one of literature’s greatest voices.  However, more than fifty years after her death, her masterpiece, A Raisin In the Sun, continues draw audiences curious to learn why the play is one of the longest running on Broadway.   I personally attended a run starring Denzel Washington and his portrayal as Walter Lee Younger is as good as the original performance by the legendary Sidney Poitier.  For some, Hansberry remains a bit of a mystery. and a throwback to an era long past.  The younger generation of today largely have yet to discover her genius and her influence on the African-American experience.  And what many of them are unaware of is that five decades ago, she was a voice advocating for the many freedoms they have today.   Sadly, it has taken many years for her to be recognized for the gifted writer that she was.  As we come to know her work more intimately, we must ask ourselves, who was the real Lorraine Hansberry?  Imani Perry searched for and found her in this semi-autobiography and psychoanalysis.  The book is an examination of Lorraine’s thoughts and writings while also adding  recollections of historical events filled with larger than life figures who are no longer with us today.  But make no mistake, this is about Lorraine, the woman who changed Broadway.

Before I started the book, I was not sure what to expect.  I had previously read a biography of Hansberry, Young, Black and Determined: A Biography of Lorraine Hansberry, by Patricia C. McKissack and Fredrick L. McKissack and Lorraine’s published works.  Surprisingly, this book takes a completely different approach in revisiting Hansberry’s life.   The author does follow her life from beginning to end like a standard biography but where the book takes its own path is in the author’s excellent analysis of who Hansberry while breaking down each part of her life so that we may unravel the complicated layers that composed the dynamic figure.  And like most popular figures gifted with talent, her life was anything but ordinary.

If you are expecting this book to read like a standard biography, this is not the case.  In fact, things get very psychological as we step deep inside Lorraine’s mind to understand how she came to view the world she lived in.  Jim Crow, Communism, homophobia and Vietnam were just some of the many topics she felt so passionately about.  Her words were sharp, cutting right to the heart of the matter and her point was made, always unapologetic.  Today she is viewed as a pioneer and visionary, but in her era, she was viewed as a radical who even attracted the attention of the Federal Bureau of Investigation (FBI).  But such was the character of Lorraine Hansberry, afraid of no one and nothing.  Perry captures her fierceness and determination with a haunting accuracy that caused me to feel as if Lorraine was alive and speaking directly to me.  In addition, throughout the book, I could not help but feel a strong sense of loss over the death of Hansberry, a woman who died many years before my birth.  But those feelings are a testament to her gift and legacy which continues to thrive.

There is one subject in the book that I feel deserves special mention.  For many years, rumors have persisted about Hansberry’s sexuality.   We know that she was once married to Robert Nemiroff (1929-1991), who worked dutifully to preserve her legacy all the way up until his final days.   But from Perry’s research and Lorraine’s own words, I believe the rumors can be put to rest once and for all as her true feelings are clearly shown.  Fittingly,  Hansberry’s sexuality is a key component to her work and the story at hand. Perry handle the subject perfectly,  making sure not to let it dominate the story or detract from it.  And that is one of the true hallmarks of a good biographer.

To say that Hansberry’s life was eventful is an understatement.  This is her life, a story filled with love, civil rights, fame, loneliness and tragedy.  She was far from simple and it is clear that from everyone that knew her,  she was unique and one of those rare people who come into your life and change it forever.   It is my sincere hope that more young men and women continue to discover her work and learn about her life.   For Black-Americans, she is sometimes a forgotten voice in a power movement that changed the United States and countries around the world.  If you have the time, take a journey with Imani Perry and go looking for Lorraine.